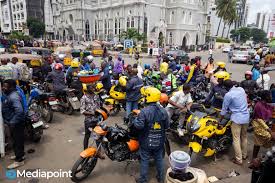 The state Commissioner for Information and Strategy, Gbenga Omotoso, who made the announcement at the State House in Alausa, said the measures were taken by the Government in response to “scary figures” of fatal accidents recorded from operations of Okada and tricycles in the State between 2016 and 2019. Omotoso said the lack of regard for the Lagos Traffic Laws by the Okada and tricycle riders had resulted in preventable loss of lives, adding that their impermissible movements on restricted highways had also contributed to traffic jams.

According to the Commissioner, operations of Okada and Keke NAPEP have been banned in the following LGAs and LCDAs: Apapa LGA, Apapa Iganmu LCDA, Lagos Mainland LGA, Yaba LCDA, Surulere LGA, Itire-Ikate LCDA, and Coker-Aguda LCDA.

“The figures are scary. From 2016 to 2019, there were over 10,000 accidents recorded at the General Hospitals alone. This number excludes unreported cases and those recorded by other hospitals. The total number of deaths from reported cases is over 600 as at date.

The Okada and Keke NAPEP is restricted on the following highways and bridges: