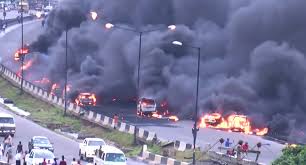 Nine persons died in the petrol tanker fire around Otedola Bridge on the Lagos-Ibadan Expressway on Thursday after it caught fire and spread the inferno to the vehicles behind, the Federal Road Safety Corps said.

The FRSC also said in its update that the victims were burnt beyond recognition. There were four other serious injuries.

According to the FRSC, 54 vehicles were burnt. There were 45 cars caught in the inferno, along with five buses, two trucks, inec tricycle and the tanker itself .

According to Bisi Kazeem, spokesman of the FRSC, the cause of accident was break failure suffered by the petrol laden tanker.