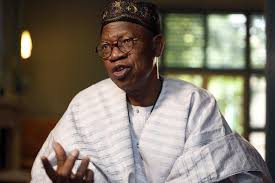 The Minister of Information and Culture, Lai Mohammed, has issued a new regulation to compel the National Broadcasting Commission (NBC) to implement 70% local content in broadcasting.

This was contained in a statement issued in Abuja on Thursday revealing the Minister’s new directives to NBC.

The statement which was signed by the Special Assistant to the Minister, Segun Adeyemi, also contained the new directive aimed at repositioning Nigeria’s broadcast industry, creating jobs, promoting local content, and boosting the advert industry.

“Major highlights of the Minister’s directive include new regulations to compel broadcasters to utilize the content and services of Nigerian independent producers, in fulfillment of the regulatory requirements for 70% local content, rather than the current abuse of the rules which allow many loopholes for the production of such content in jurisdictions outside Nigeria,” the statement read in part.

This according to the Minister will empower local producers with proper funding and investment, enhance foreign collaborations, develop the local industry, raise the standard of local productions and ultimately lead to job creation.

The new regulation frowns against illegal and unpaid use of musical works by broadcast stations without payment of royalties. It also put an end to exclusivity in sporting rights in the country.

“For musical content, a new regulation will ensure that broadcasters are prevented from illegal and unpaid use of musical works without payment of the applicable license fees and/or royalties required by music rights owners.

“Similar provision will prohibit exclusivity of sporting rights in Nigeria, as a new regulation now mandates broadcasters and exclusive licensees to share such rights with other broadcasters to boost reach and also maximize utilization by all broadcasters of premium content, in order to grow their platforms and investment in other content.”

The Minister concluded that this regulation will prevent the misuse of monopoly or market power or anti-competitive and unfair practices by a foreign or local broadcaster to suppress other local broadcasters in the television and radio markets.