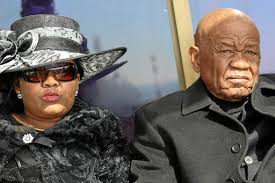 Police have summoned Thomas Thabane, 80, the prime minister of Lesotho for questioning over alleged links to the 2017 murder of his estranged wife, Lipolelo Thabane who was shot dead just weeks before he remarried.

Lipolelo, 58, was gunned down outside her home in the country’s capital Maseru in June 2017, two days before the inauguration of her husband, who later remarried two months after the murder.

The couple had been embroiled in bitter divorce proceedings after Lipolelo reportedly refused to divorce her husband and won a court battle to retain her privileges as the country’s first lady until their formal separation.

Now, Lesotho’s police chief has invited the Prime Minister for questioning over claims that call records showed that someone at the murder scene had called Thabane’s mobile phone on the day of the crime.

Police want to know why a call was made to his mobile phone from the scene after the killing.

Police commissioner Holomo Molibeli wrote to Mr. Thabane demanding to know the caller’s identity and the ‘subject matter’ of the call from the murder scene.

He wrote: ‘The investigations reveal that there was a telephonic communication at the scene of the crime in question … with another cell phone. The cell phone number belongs to you.’

‘This case does not only attract the attention of Basotho nation (Lesotho) but it is of international concern,’ deputy police commissioner Paseka Mokete said in a statement.

This comes days after Thabane said he planned to resign after senior members of the All Basotho Convention (ABC) party accused him of hampering investigations into the killing.

‘As the prime minister I have undertaken an oath to respect and protect the constitution and all other laws of Lesotho,’ he told reporters in Maseru, promising to ‘get to the bottom of this matter’