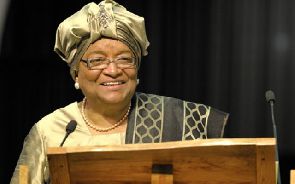 In February 2018, former Liberian President Ellen Johnson Sirleaf, was announced winner of the $5 million Mo Ibrahim award. But she will be officially handed the honour at an event in the Rwandan capital, Kigali, today.

In a statement ahead of the event, the Mo Ibrahim Foundation said: “The weekend begins with a Leadership Ceremony, where this year we welcome and celebrate the 2017 Laureate, Ellen Johnson Sirleaf of Liberia.

The Ibrahim Governance Weekend is the flagship event of the Mo Ibrahim and is held every year in a different African country. It will include a Governance Forum, a Concert and the Leadership Ceremony.

“The evening will celebrate the 2017 Ibrahim Prize Laureate, Ellen Johnson Sirleaf of Liberia, who will receive her award on stage,” the Foundation said.

The award is designed to improve the quality of African political leadership. Sirleaf, a former Nobel Peace Prize laureate and Africa’s first elected female head of state, who handed over leadership of the West African state earlier this year to ex-international soccer star George Weah.

She becomes the fifth recipient of the award which is in its tenth year. Since its inception in 2007, the prize founded by Sudanese telecommunications tycoon Mo Ibrahim has not been awarded in some years because there was no leader considered worthy of it. Already Ivorian president Alassane Ouattara is in Kigali for the event.

The Mo Ibrahim Foundation at the time of the announcement praised Johnson Sirleaf for her “exceptional and transformative leadership” in helping steer Liberia’s recovery from many years of civil war.

“During her twelve years in office, Ellen Johnson Sirleaf laid the foundations on which Liberia can now build,” the Foundation said.

On hearing the outcome of the Prize Committee’s deliberations, Mo Ibrahim said: “I am proud to see the first woman Ibrahim Laureate, and I hope Ellen Johnson Sirleaf will continue to inspire women in Africa and beyond.”

The prize committee admitted that while Sirleaf was accused of tolerating corruption, she had shown exceptional leadership in difficult circumstances. It added that Liberia was the only country out of 54 to improve in every category and sub-category of the Ibrahim Index of African Governance.

The Ibrahim Prize aims to distinguish leaders who, during their time in office, have developed their countries, strengthened democracy and human rights for the shared benefit of their people, and advanced sustainable development.

Candidates for the award have to be democratically elected African heads of state or government who have left office during the previous three years at the end of their mandated terms.

The prize is $5 million paid out over ten years, with another $200,000 annually throughout the winner’s lifetime.