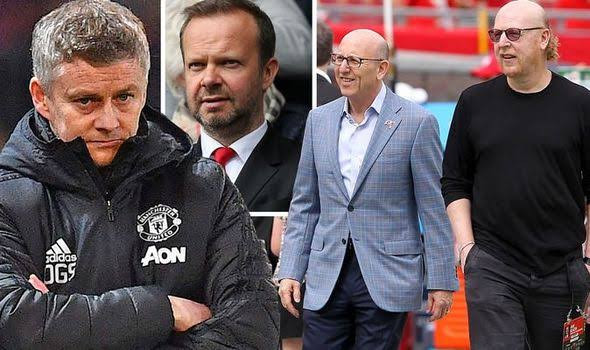 Manchester United head coach Ole Gunnar Solksjaer has come out to defend his club’s owners – the Glazer family and the club’s CEO Ed Woodward after fans chanted vile abuses towards both men during the club’s 4-0 win over Norwich on Saturday night.

The club’s fans, angry at poor transfer dealings over the last 8 years at the club, made vile chants towards the Glazers and Woodward, with one fan, in particular, making a distasteful chant about putting Woodward on a bonfire’.

The 3-1 home defeat to City in the Carabao Cup semi-final first leg on Tuesday showed the gap between the two clubs and fans are furious that the Glazers — some of whom were at Saturday’s game with Woodward — have loaded £500m of debt on the club, despite taking in millions of pound nearly as income, leaving the club unable to spend large sums of money on the right players.

Solskjaer speaking to the press after Man U’s win admitted hearing the chants but urged the fans to ‘stick together’ and support the club’s hierarchy, Solksjaer said:

‘They (the fans) have just got to believe me when I say I feel we are doing loads of good things behind the scenes, we are going in the right direction. See the group today, the attitude, the work-rate, that’s the core of the group that’s gonna go forward. We are in all competitions. We are still in the Carabao Cup, FA Cup, we’re fifth in the league, still challenging, we’ve improved the position from last season. We’ve got Europa League.’

United are to face Wolves, Liverpool and Manchester City and a loss to any of these teams could increase fan outrage towards the club’s owners