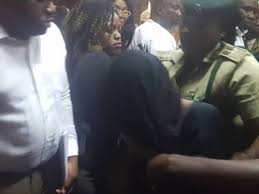 The court has sentenced the accused to death by hanging for stabbing her husband to death.

The deceased, Bilyaminu Bello, was the son of a former national chairman of the Peoples Democratic Party (PDP), Haliru Bello.

Police believed the murder was premeditated as Ms. Sanda committed the crime with broken bottles at about 3:50 am on November 19, 2017, following an allegation of infidelity against her husband after seeing a text message on his phone.

In January, the police charged her for culpable homicide and sought a death penalty against her on two counts.

Upon hearing the final pronouncement from Justice Yusuf Halilu, the accused fled the dock but she was brought back by court officials and prison officials.

According to reports, Ms. Sanda began wailing and shouting “Inna lilahi Inna roji hun”, after hearing her fate while her family and lawyer tried to console her.

The accused was also heard saying, “I was fasting and praying … Ya Allah, why?”.