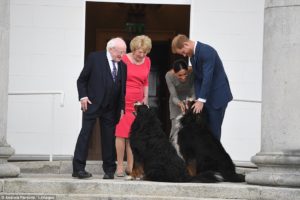 Prince Harry and his wife Meghan have embarked on the second part of their two-day trip to Ireland. The tour is the Duke and Duchess of Sussex’s first foreign visit since their wedding in May.

The duke and duchess met the president and his wife at the statesman’s official residence Aras an Uachtarain, the former British Viceregal lodge in Dublin’s Phoenix Park.

They rang a Peace Bell erected in the garden of the grand 18th century house in 2008 to mark the 10th anniversary of the Belfast Agreement and toured the grounds with the presidential couple and their two Bernese mountain dogs, Brod and Sioda.

It was their first engagement on the second and final day of their pre-Brexit charm offensive in Ireland, which comes less than a month after Prince Charles and the Duchess of Cornwall visited the Emerald Isle.