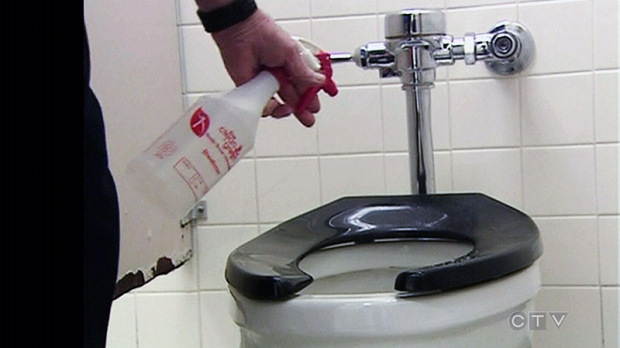 But by the 1970s, most of the octagon-shaped structures had fallen into disrepair and were demolished, leaving Montrealers with no city-run, round-the-clock places to relieve themselves — until now.

After several months of delays, the City of Montreal says it is preparing to unveil the first three of a planned 12 high-tech, self-cleaning, free-to-use public bathrooms.

It will cost $3 million to install the devices, which include weight sensors and an automated seat and floor-washing system.

While the price has raised eyebrows, experts say the measure is only a small first step toward relieving what they say is an urgent problem with various social implications.

While public free-standing bathrooms are common in Europe, advocates say most Canadian cities lag behind when it comes to meeting a basic human need.

Toronto has three automated self-cleaning toilets, while Vancouver does slightly better with 11, according to an online map produced by the Downtown Vancouver Business Improvement Association.

Other cities, including Edmonton, publish a map of the bathrooms that are available in parks, libraries, and train stations, but many don’t operate year-round or at night.

The lack of public facilities can keep some people home if they’re elderly, pregnant, or suffering from gastrointestinal diseases, according to a spokesperson for Crohn’s and Colitis Canada.

“Unfortunately, a lot of people when they go into a small business are often turned away because owners have their own reasons for denying someone access,” Rasheed Clarke said in a phone interview.

In 2015, the organization launched a campaign called “GoHere” in order to partner with cities and private businesses to ensure better bathroom access.

Businesses that are open to allowing the public to use their facilities receive a window decal and agree to be listed on a map of locations on the organization’s website.

Clarke said he understands that city-run public bathrooms are expensive to build and maintain to a safe and hygienic standard, but the effort is appreciated.

“Any time a city creates more public washrooms, it’s certainly a victory in our lives,” he said. “It’s a step in the right direction.”

Given that the need is universal, a Halifax-based freelance journalist said the more relevant question is why cities aren’t more pressured to provide bathrooms in the same way they are expected to build other public infrastructure.

Lezlie Lowe, who is also the author of an upcoming book about public toilets, said part of the reason may be that the groups who have the hardest time gaining access to them — such as the homeless or those who are transgender — are also among the most marginalized.

As she began researching the topic over a decade ago, Lowe said she began to realize that not everyone enjoyed the same access she’d always taken for granted as a white, middle-class and healthy person.

“I can go into a Starbucks and I seem well put together and confident, and I can either go up or ask to use the bathroom…. Or, if I’m pressed on it, I have enough money to buy a coffee,” she said in a phone interview.

“But if somebody is street-involved or homeless, they can’t really count on that privilege.”

Lowe said cities are able to spare the considerable expense of running bathrooms in part because those who need them most don’t speak out, because they may be marginalized or simply embarrassed.

“I’d like to think people are more able to talk about these things, because they matter,” she said.