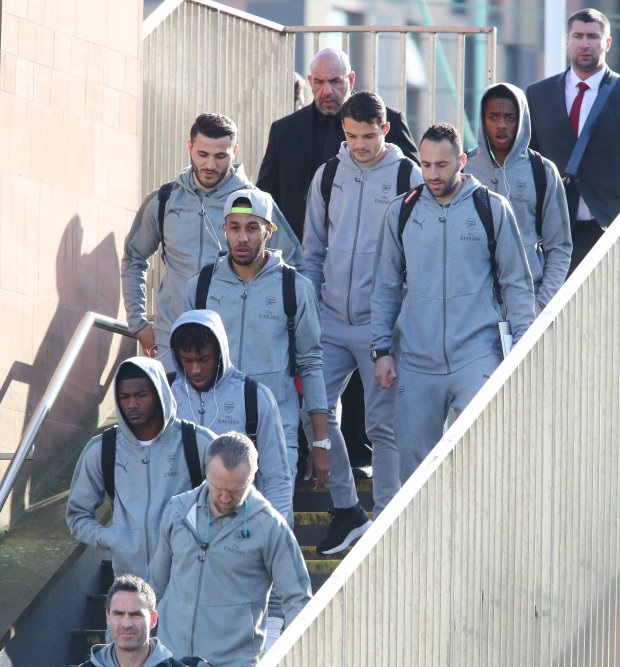 Mesut Ozil, Aaron Ramsey, Jack Wilshere and Alexandre Lacazette will miss Arsenal’s clash with Manchester United on Sunday as Arsene Wenger has decided to rest seven first-team players for the trip to Old Trafford. Wenger has admitted that winning the Europa League is now his priority for the season but after the 1-1 draw in the first leg of their semi-final against Atletico Madrid on Thursday evening, Arsenal face a tough task of progressing to next month’s final in Lyon. To ensure his squad are fresh for the return leg in Madrid next Thursday, Wenger is making wholesale changes to his team for the match against Jose Mourinho’s side. Ozil, who played a full 90 minutes against Atletico, did not train with his teammates during their light session on Saturday morning and did not travel with the squad to Manchester that afternoon. Ramsey, Wilshere and Lacazette also started against Atletico but have not made the trip to Manchester.

Wenger is also set to make significant alterations to his defence as Laurent Koscielny, Shkodran Mustafi and Nacho Monreal will also miss the match at Old Trafford. Reiss Nelson, Joe Willock and Eddie Nketiah have already made appearances for the first team this season and have travelled to Manchester. Greek defender Konstantinos Mavropanos, who was signed in January from PAS Giannina, is in the squad and could make his debut.

ARSENAL PLAYERS WHO TRAVELLED TO MANCHESTER
Hector Bellerin
Reiss Nelson
Eddie Nketiah
Jordi Osei-Tutu
Danny Welbeck
Petr Cech
Calum Chambers
Alex Iwobi
Konstantinos Mavropanos
Henrikh Mkhitaryan
Joe Willock
Granit Xhaka
Sead Kolasinac
David Ospina
Pierre-Emerick Aubameyang
Ainsley Maitland-Niles
Rob Holding
Jordi Osei-Tutu, a 19-year-old right-back who came through Reading’s academy before joining Arsenal three years ago, also travelled and could made a surprise debut. Henrikh Mkhitaryan missed the draw against Atletico due to a knee injury but trained on Saturday and is in the squad to face United. Mohamed Elneny also made a surprise appearance in training on Saturday but the midfielder, who has been sidelined with an ankle injury and was expected to miss the rest of the season, will not feature against United.