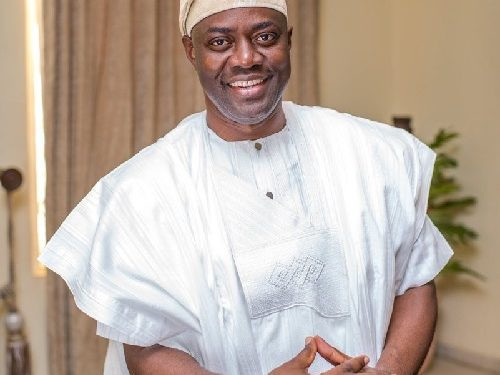 Seyi Makinde disclosed his salary as the Governor of Oyo State while addressing the newly sworn-in Commissioners in the state.

The Oyo state Governor who expressed readiness to tackle poor remuneration in the state’s civil service, said his salary as Governor of the state is N650k. Governor Seyi Makinde also revealed how he thought his salary was going to be like N3 or N4 million monthly when he announced that he was giving it all to the Pension Board during his inauguration.

Seyi Makinde admitted that anti-corruption initiatives might be hindered by poor remuneration packages as he charged the commissioners to work towards his vision and manifesto of accelerated development of Oyo State.

He said, “We do have challenges and I can give you an example of the kind of issues that we are faced with. When I was on the podium being sworn-in, I announced that I was donating my salary to the pension board. I actually thought my salary was going to be like N3 or N4 million monthly but when I came in here, I discovered that my salary is only six hundred and fifty naira (N650,000) monthly, which is less than two thousand dollars ($2,000). And then, I have a budget of over five hundred million dollars.

“How can somebody earning $24,000 a year preside over a five hundred million dollar budget? The temptation is just too high.

“When I was growing up, anytime I saw permanent secretaries and top civil servants, all around with their entourage, jeeps, Land cruisers, I thought they were making it big because I was driving Peugeot or Toyota Camry.

“But when I came in here, the salary of Permanent Secretaries is under N500,000 per month; in such an environment where you have contractors coming with big temptations. The expectation is just too great and high. But the good news is, we will find a solution to this. It’s going to business unusual in Oyo State.”