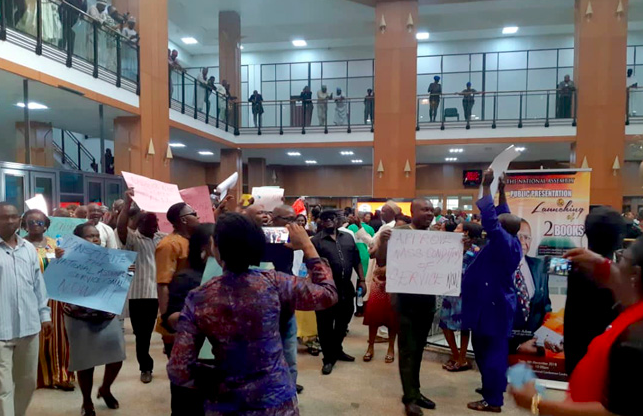 Activities at the National Assembly have been grounded as the staff under the auspices of Parliamentary Staff Association of Nigeria (PASAN) today, Monday, made good their threat to embark on a four-day strike.

The workers stormed the entrances to the National Assembly Complex in the early hours of Monday to barricade the gates and prevent entry.

More security operatives have been deploy to manage the protesters. Workers at the National Assembly have now shut down power and water supplies to the complex. The blockage of all entrances to the building has forced banks, restaurants and other businesses to close shops.

It would be recalled that the aggrieved workers had two weeks ago shutdown the National Assembly, stopping lawmakers from sitting; blaming the Management of the National Assembly for their plight and insisting on the removal of the Clerk to the National Assembly, Sani Omolori. Although no official statement has come from the management as at the time of filing this report; the Clerk had clearly dropped the blame at the door steps of the executive when he said there has been no releases to implement the worker’ wage increase captured in the 2018 budget.