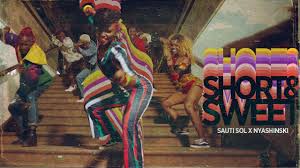 The group has also released the visuals for ‘Short & Sweet’.

Sauti Sol will be dropping dope collabos from around the continent every month till late this year.