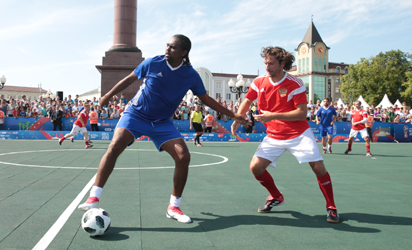 Nigerian Football Legend and former Super Eagles captain, Kanu Nwankwo was
recently robbed of $8,250 US dollars in cash after he arrived in Moscow
where he was playing in a World Cup curtain raiser game organised by FIFA.

According to Russian police, the money was stolen by two loaders at
Moscow’s Sheremetyevo Airport, Lt-Col Irina Volk, spokeswoman for the
Russian Interior Ministry, said the loaders were dealing with the baggage
from a London to Moscow flight, The stolen cash was removed (from the
loaders) and will soon be returned to the owner’, she said.

Despite being robbed, Kanu who played for FIFA legends team still had nice
things to say about his trip to Russia during an interview