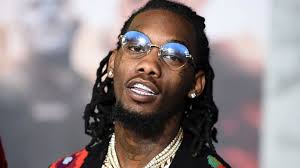 Police detained Offset along with more than one person in his entourage at the popular Los Angeles shopping center The Grove on Wednesday.

Around 8 pm, the authorities received a report that someone in the mall’s parking structure had a gun, according to sources who spoke to TMZ.

The armed person has allegedly fled and TMZ have not been able to establish whether Offset, 28, or anyone in his entourage had a gun at the time.

Four people including Offset have been brought to the police station to be questioned but nobody has been arrested.

An investigation is being conducted by law enforcement, who have found two guns, the website reports.

Police cuffed Offset’s hands behind his back and pressed him against a pillar as he struggled and demanded more information, TMZ footage showed.