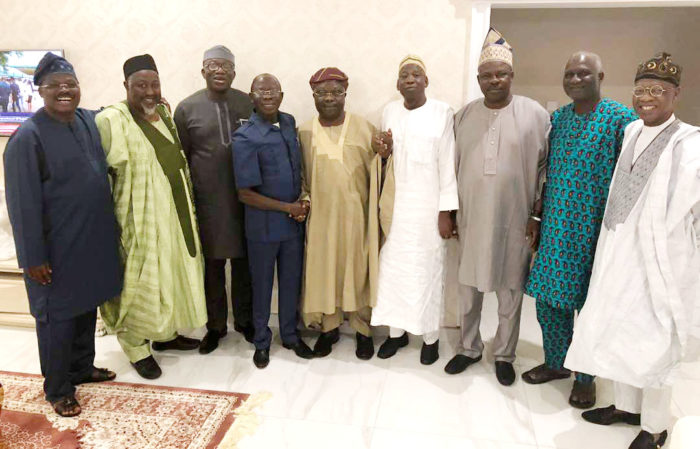 Reports said he has agreed to ensure the success of the APC candidate, Gboyega Oyetola.

His position became clearer on Wednesday after he met a powerful delegation of the APC, led by the national chairman, Adams Oshiomhole, four governors- Badaru, Ganduje, Amosun and Ajimobi and Ekiti-governor elect, Kayode Fayemi. The Minister of Information and Culture was also in the delegation.

Also boosting the chances of the APC candidate is the deputy speaker of the House of Representatives, Yussuff Lasun.

He has also agreed to join the battle to ensure victory for All Progressives Congress (APC) candidate Gboyega Oyetola in tomorrow’s supplementary governorship election in Osun State, The Nation Reported.

The APC lost in Orolu Local Government Area, which is believed to be Lasun’s stronghold. He is known to be aggrieved with APC leaders.

The supplementary election will hold in three units in the local government due to cancellation over hijacking of materials by thugs.

There are 987 registered voters in the three units.

The election will determine the winner between Oyetola and Adeleke.

There are 3, 498 registered voters in the polling units where the elections were cancelled due to various reasons, including hijacking of election materials, abscondment of presiding officer, disruption of election by hoodlums who were shooting sporadically, manual accreditation and over voting.

The supplementary election is a straight fight between Oyetola and Adeleke.

Adeleke has a marginal 353 votes advantage in the election in which Omisore finished third.

On Monday, he received Senate President Bokola Saraki, who came to lobby him to support the PDP.

Omisore, who left the PDP for the SDP because the PDP ticket was skewed in favour of Adeleke, declined to give Saraki his commitment.

But after his meeting with the APC team, Omisore twitted under a photograph of himself with Fayemi and Agunloye: “With @OfficialAPCNg Ekiti state governor elect @kfayemi during his visit today. #goodgovernanceinosunstate #OsunDecides2018.”

It was learnt that Omisore, whose dad is the traditional ruler of Olode in Ife South where the election will hold in unit 07, 012 Adereti village with 812 registered voters, joined the APC for a campaign Tuesday.
NAN