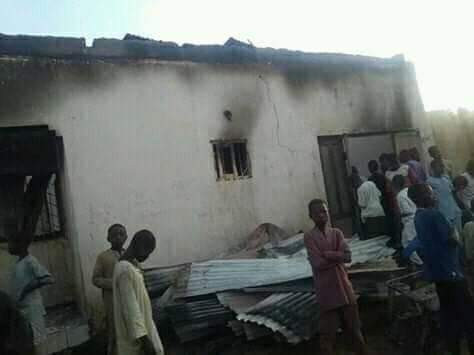 Angry youths on Tuesday night burnt the house of the Secretary to the State Government, Mustapha Inuwa, and two offices of the All Progressives Congress, to protest the spate of armed banditry attacks in the area with the last on a trader brutalized by armed bandits, while returning from market.

It was learnt that the armed robbers snatched motorcycles from two men who were returning from a market.

According to reports, the irate youths complained first to the police and later to the District Head before using tyres to set the SSG’s house and the APC offices in the town ablaze.

The spokesman of police command SP Issh Gambo, who confirmed the report, said arrested 35 persons have been arrested over the incident.

“ On 3/09/2019 at about 2200hrs, two men armed with daggers were reported to have snatched a motorcycle at Gurzau village, Danmusa LGA of Katsina state. Vigilante men on duty were alerted and pursued the hoodlums on motor bikes.

“But some miscreants took to the streets, for inexplicable reason, and started burning tyres. DPO Danmusa and team swiftly moved in, dispersed them and removed the blockades on the streets. Some of the youths organized and moved to the house of the Secretary to the Government of Katsina state, Alhaji Mustapha Mohd Inuwa, who is an indigene of the town and set his house on fire. The rioters also burnt down two APC political party offices and vandalized one,” Isah said.

He said the police, army and other public spirited individuals worked together and put off the fire.

“Consequemtly 35 suspected persons were arrested while committing the act and various incriminating exhibits recovered. Investigation is ongoing”, he said.

“Investigation is ongoing.  The commissioner of police Katsina state Command, CP Sanusi Buba, Psc calls on parents to always look after their wards not to be allowed to be used by some misguided elements as tools for mischief making.  The Command will leave no stone unturned until other perpetrators at large are fished out” he added.