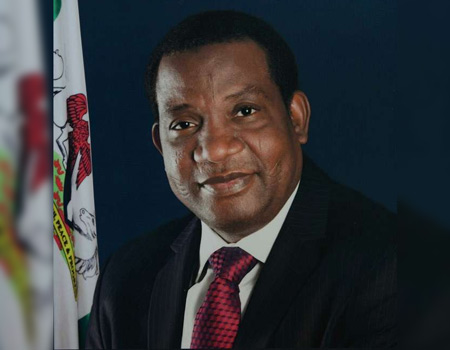 Gov. Simon Lalong of Plateau has formally declared his intention to contest 2019 governorship poll in the state.

Lalong made the declaration at Plateau All Progressives Congress (APC) stakeholders meeting in Jos on Friday.

The governor said that the declaration was as result of the intense pressure  from the people of the state for him to recontest.

Edward Pwajok, Member Representing Jos South/Jos East at the House of  Representatives moved the motion for Lalong to recontest.

Pwajok’s motion was unanimously seconded by voice vote from stakeholders at the meeting.

They appreciated Lalong for steering the APC in the country away from crisis following his committee’s report which gave an amicable solution to divergent views concerning the tenure of the party officials.

Dabang, however, said that other interested candidates on the party’s platform were free to contest the position.

He said that contesting was a right of every party member and that the party would provide a level playing ground for all.

“We cannot stop anybody from contesting but for now Gov.  Lalong is the one that publicly declared to contest.”

He said that the stakeholders meeting was convened by the party leadership to brief members of the resolutions reached at the last National Executive Council (NEC) meeting in Abuja on Monday.

Present at meeting were the Deputy Governor, Prof Sonni Tyoden, National and state House of Assembly members, members of Plateau Executive Council and many other party men and women.