Amnesty International joined Nigerians in reacting to the alleged invasion of Timi Dakolo’s house by armed policemen from Abuja, and according to them, it is a move to intimidate victims of sexual abuse.

The human rights agency raised an alarm over an alleged disturbing pattern, in which authorities respond to allegations of sexual abuse. It also recounted past incidents, in which victims of rape were reportedly subjected to arrest and intimidation by the Nigerian police.

Intimidating victims of sexual abuse using @PoliceNG is a new low in Nigeria’s spate of impunity. In Feb. armed SARS officers arrested Maryam Awaisu of #ArewaMeToo in Kaduna and dragged her to Abuja, at the instance of a person widely accused of rape & sexual abuse.

For too long, Nigeria’s women have been facing various kinds of sexual violence that seldom receives proper attention from the country’s law enforcement agencies. It is unacceptable that women seeking justice end up intimidated by Nigeria Police @PoliceNG

It is unacceptable that women seeking justice for sexual abuse are subjected to arrest and intimidation, by a unit of police whose remit is armed robbery. We fear that these actions may prevent victims of sexual violence from pursuing justice.

In the face of rising sexual abuse of women & girls across #Nigeria; for how long will women be continuously subjected to intimidation and forced silence in the face of injustice? When will the injustice end?

This pattern of Nigeria Police @PoliceNG dispatching anti-robbery squads to pick up victims of sexual abuse who refused to be silent is unacceptable. 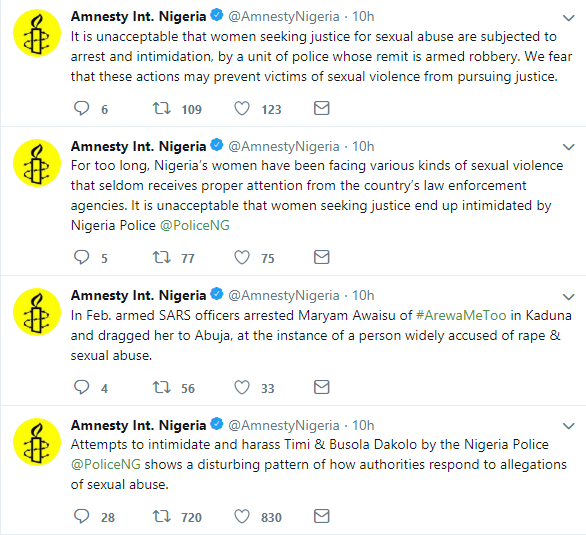