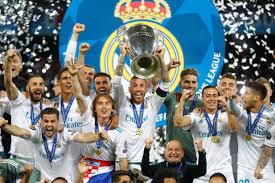 Spanish giants Real Madrid has won the UEFA champions league after a 3-1 scoreline against English side Liverpool. The defending champions opened scoring in the 2nd half after a scoreless first half with Karim Benzima capitalizing on an error from the Liverpool goalkeeper to slot home the first goal of the game.

The lead lasted for only 8 minutes as Liverpool equalize from an uncleared corner kick through hitman Sadio Mane. The game’s turning point was a stunning goal from substitute Gareth Bale after he met a cross from Marcelo   with a sublime overhead kick to put the defending champions in from once again in the game.

The Welsh man secured victory for the Spanish side with his well taken shot from outside the box to record his second goal of the night. There were several talking points in the game including the tackle by Sergio Ramos on Mo Salah in the first 45 minutes of the game.