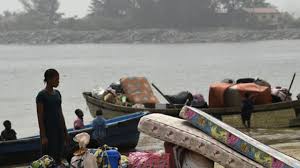 Residents of Tarkwa Bay, an island in Lagos were evicted at gunpoint on Tuesday by Nigerian navy personnel.

The eviction was aimed at stopping the looting of nearby oil pipelines.

Oil pipelines that supply Lagos run along beaches on the Atlantic coast in the area that are a popular escape for day-trippers from the city.

The Nigerian navy said the operation was aimed at protecting equipment belonging to the country’s national oil company from “vandals”.

The people shouted that they were being “scattered” by the security forces as they loaded boats with household items, diesel generators, and business wares before making the journey to other parts of the city.