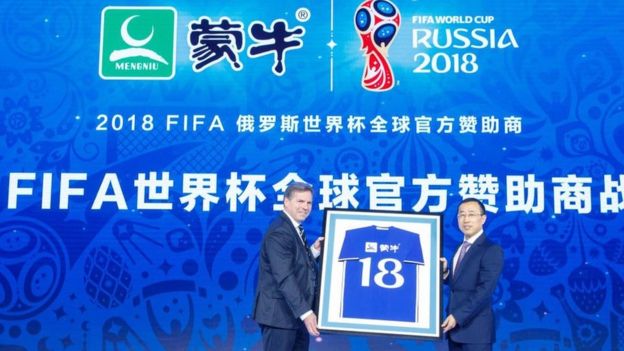 The value of World Cup sponsorship has dropped between the 2014 event in Brazil and this year’s in Russia, according to Nielsen Sports’ research. Fifa sponsor revenue fell from $1,629m (£1,214m) to $1,450m between events.

Global market research firm Nielsen says the 2015-18 sponsorship cycle had been “a tougher sell” than for the previous two World Cups.

“But a new crop of sponsors, including several from China, helped Fifa weather the storm,” it said

Chinese sponsors stepped into the breach after a number of long-term Fifa backers, such as Johnson & Johnson, Castrol and Continental, ended their association after the corruption scandal at football’s world governing body in May 2015.

One of the companies Wanda owns is InFront Media, a sports marketing firm which owns the media rights for the 2018 and 2022 World Cups across 26 Asian territories.

Mengniu has the exclusive rights to sell yoghurt drinks and ice cream in the Russian World Cup stadiums.

The value of World Cup sponsorship may have fluctuated recently, but overall it has grown strongly in the past two decades with Fifa’s 2015-2018 cycle revenues more than twice the amount for the 1999-2002 period.

“Fifa will be hoping to return to growth in the cycle leading up to the 2022 World Cup in Qatar,” said Nielsen Sports’ managing director Glenn Lovett.

“It can probably look forward to support from Middle Eastern brands seeking to capitalise on the region’s first World Cup.

“The organisation will also be hoping for a positive response from sponsors to the ‘Fifa 2’ modernising reforms introduced by president Gianni Infantino in 2016.”

These include investing in football development and increasing participation, looking to introduce new standards for transparency and governance, and aiming to double the number of female players worldwide to 60 million by 2026.

The vast majority of World Cup sponsors are from Europe, North America and Asia. African companies agreed deals during the 2010 South African World Cup cycle, and South American companies did so around Brazil 2014.

“But neither region contributed a sponsor this year,” said Mr Lovett.

“Asian sponsors are growing in prominence, and indeed are the most significant at World Cup 2018, accounting for 39% of deals.”

And it is those Chinese sponsors emerging for the first time that have been the major factor in Asian growth.

Football has boomed in China, with strong encouragement from the government, which is keen to host the World Cup as soon as possible.

“Fifa’s Chinese deals can be seen as the country’s corporations rowing behind the national effort to develop the game and attract the World Cup,” Mr Lovett said.

According to Nielsen, interest in football in China increased from 27% of the urban population in 2013 to 32% in 2017, with three-quarters of those who said they liked the sport being aged under 34.