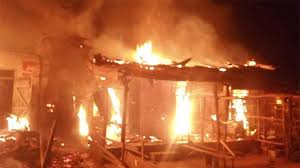 A video of the fire outbreak posted on Twitter indicates there are no emergency operatives currently at the scene. There has no been an official reaction from the state government too. People seen in the video are scampering to recover whatever they can from the fire while voices heard in the background speculate that the fire could be as a result of an electrical surge.

The Sabo market fire comes three days after Amu timbre market in the Olorunshogo area of Mushin, Lagos state was gutted by fire. Many goods and properties were destroyed in the fire that reportedly started in the early hours of Saturday, January 25.

The acting head of Lagos State Fire Service, Margaret Adeseye, said the crowd was to blame for the delay in putting out the fire. She said operatives of the fire service responded swiftly to the emergency call with a vehicle. Adeseye said additional vehicles were deployed to the scene to give support. “But we faced a similar challenge of crowd control. Our men couldn’t get to the fireplace. “We had to call on the police to help push clear the way before the firefighters could access the place,” Adeseye said.