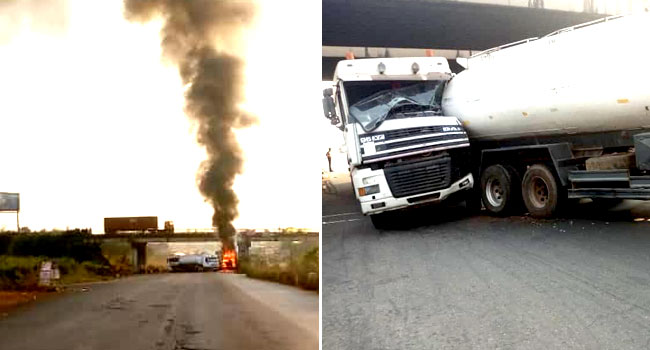 The Ogun State Sector Command of the Federal Road Safety Corps has announced the closure of some sections of the Sagamu Interchange Bridge as a result of the tanker explosion that occurred underneath it on Wednesday.

The command’s Public Education Officer, Florence Okpe, stated this in a statement on Thursday.

ACCORDING TO PUNCH Metro; –  two fuel-laden tankers crashed into each other under the bridge around 5.30 pm on Wednesday, and the impact led to an explosion.

One of the tankers was reportedly rolling backward after suffering a mechanical fault and the other rammed into it. Though no life was lost, the two tankers were burnt.

Okpe stated that experts invited from the Federal Ministry of Works and Housing to examine the bridge after the incident advised that it should be closed temporarily to avoid further tragedy.

She said, “Due to the damage done by the two petroleum tankers that crashed underneath the Sagamu Interchange Bridge in Sagamu, Ogun State, on Wednesday, December 25, 2019, the FRSC invited engineers of the Federal Ministry of Works and Housing to assess the continuous usage of the bridge due to the intensity of the fire that damaged some sections of the bridge.

“Based on their professional advice, most sections of the bridge are still safe for motoring, while other sections compromised by the fire will be isolated to prevent vehicles from using those sections; but the sections safe for motoring will still be available for use by vehicles, while the process of reinforcing the bridge is intensified.”

The FRSC Sector Commander, Clement Oladele, urged motorists to cooperate with the corps and other security agencies in the enforcement of the partial closure of the bridge.

Oladele advised motorists approaching the bridge from the East via Ijebu-Ode to make a detour at the back of the FRSC Emergency Roadside Clinic in Sagamu to connect the Lagos-Ibadan Expressway to Ogere.