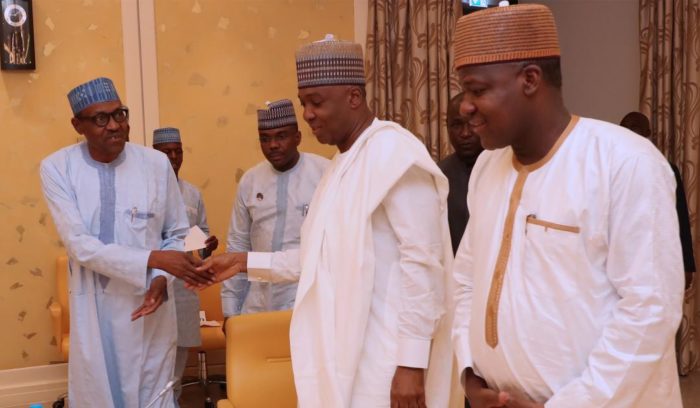 The President of the Senate Dr. Bukola Saraki and the Speaker of the House of Representatives, Yakubu Dogara are currently meeting with President Muhammadu Buhari over the recent massacre in Plateau state.

The meeting which was at the instance of the President of the Senate is currently holding at the Presidential Villa, Abuja.

The news of the ongoing meeting was disclosed on the twitter handle of the President of the Senate @SPNigeria.

The tweet reads: “The President of the Senate, Dr. Abubakar Bukola Saraki, and the Speaker of the House of Representatives, Rt. Hon. Yakubu Dogara are now meeting with President Muhammadu Buhari over the #PlateauKillings. The meeting was requested by the presiding officers of @NASSNigeria.”

Details of the meeting will be made available shortly.

Recall that following the killings, Saraki had called for a quick response to the security crisis in Nigeria.

“I am very sad to hear the news of the incident in Plateau State. This is very depressing and giving the impression that the country is not safe.

“The problem of Boko Haram in the North-east is well known to everybody but this killing by unknown band of assailants in Benue, Taraba, Plateau and Kaduna States is now giving another dimension to the crisis. Coming at the time we are getting ready for elections, we need to respond fast.

“If the plan is to develop some long term measures, we also request that the President should mandate the security chiefs to put forward an immediate short term and quick response measure which will restore confidence in the system and demonstrate to the criminals behind this killings the capacity of government to tackle the issue.

“We have to immediately device a plan through which the criminals behind the killings and their sponsors can be nabbed and made to face the wrath of the law.

“We have to also develop plans to mop up illegal fire arms in the hands of dangerous elements while also stopping the influx of these arms into the country”, he stated.