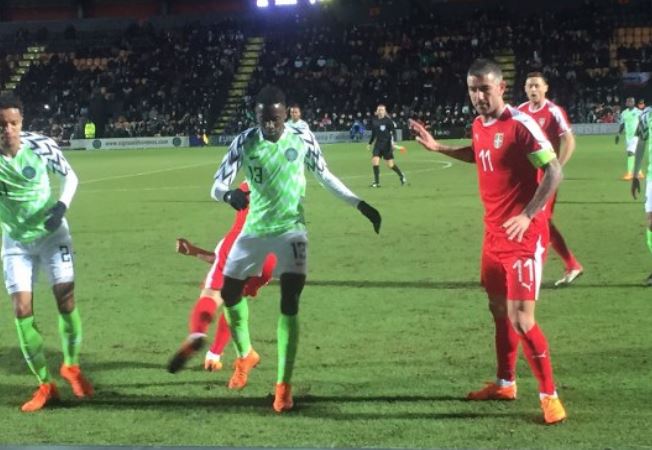 The Super Eagles were brought down to earth after their win against Poland last Friday as they lost 2-0 to Serbia in their second friendly game in London on Tuesday night.
The Super Eagles had also beaten Argentina in another friendly in Russia in November but they were no match for Serbia on Tuesday night.
A brace from Fulham striker Aleksandar Mitrovic in the second half gave Serbia the win.
It was a game the Serbians dominated from start to finish and deservedly won.

Be the first to know, join our WhatsApp group using this link CompleteSportsNG
The game saw young goalkeeper Francis Uzoho keep his place while the likes of Ahmed Musa, Chidozie, Ogenyi Onazi, Tyronne Ebuehi, Bryan Idowu all started for the Super Eagles.

Also, Al Ahly striker Junior Ajayi made his debut of the Super Eagles when he came on late in the game.

Uzoho made the first save on eight minutes as he palmed away Mitrovic’s shot close to the edge of the box.

In the 11th minute, Victor Moses took a surprise low shot but Vladimir Stojkovic got down well to parry the shot away for a corner.

Serbia thought they had opened scoring on 14 minutes following an effort from a corner through Mitrovic which looked to have crossed the line but Uzoho quickly retrieved the ball.

Replays showed the ball had crossed the line but referee Craig Pawson waved play on.
Serbia had another chance on 18 minutes from another corner but William Troost-Ekong cleared the ball before it crossed the line.
Uzoho was called to action again in the 26th minute as he quickly got down to stop a goal bound low shot.

In the 28th minute, Alex Iwobi tried a shot close to the 18-yard box which went just wide off target following good work from Victor Moses.

With five minutes remaining in the first half, Filip Kostic found space on the right side but saw his left-foot shot hit the side netting.

The Super Eagles made the game’s first substitution with Odion Ighalo replacing Moses at the start of the second half.

Former Chelsea defender Branislav Ivanovic had a good chance to put Serbia ahead on 60 minutes after he was left unmarked from a corner only to see his strike end up in the hands of Uzoho.

Ighalo should have given the Super Eagles the lead on 64 minutes after holding off his marker inside the box but his goal-bound strike took a slight deflection on the Serbian keeper and went just over the bar for a corner.

Serbia eventually broke the deadlock on 68 minutes through Mitrovic who finished off a left-foot cross after the Super Eagles defenders failed to clear their lines.

Few minutes later Ighalo had a chance to level the score but did not connect properly with the ball after doing well to turn his marker inside the box.

In the 81st minute, Serbia doubled their lead with Mitrovic again getting on the score sheet as he slotted past Uzoho from close range off another cross from the left.