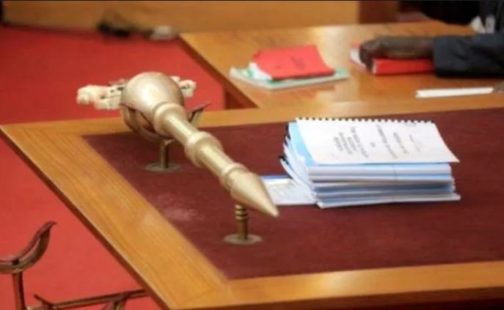 Hoodlums that sensationally stole the Senate mace on Wednesday abandoned it under the flyover before the Abuja City Gate, the police said early today.

The police said they were informed by a passerby, who saw it and alerted them, leading to its recovery.

The police said they were still in pursuit of the mace thieves and would ensure that they are brought to justice.

“While a discreet investigation into the incident is still ongoing to arrest and bring the perpetrators to justice, the Nigeria Police Force appreciates the spirited members of the public, most especially motorists within Abuja Metropolis for their support, cooperation and timely information during the rigorous stop and search operations for the recovery of the Mace,” said Police superintendent, Aremu Adeniran, the deputy police PRO.

Adeniran’s statement mentioned the efforts by the police teams, prior to the recovery of the mace.

`’IGP Ibrahim Idris immediately instituted a high-powered Police Investigation and Intelligence Team coordinated by the IGP Monitoring Unit of the Force and further directed a total lock-down of the Federal Capital Territory with intense surveillance patrol and thorough Stop and Search Operations at various Police check-points with a view to arresting perpetrators and possible recovery of the stolen Mace.

“The Police teams engaged in massive raids of identified criminal spots/flashpoints, stop and search operations, visibility and confidence building patrols, intelligence gathering which forced the suspected miscreants to abandon the Mace at a point under the flyover before the City Gate, where a patriotic passer-by saw it and alerted the Police”.