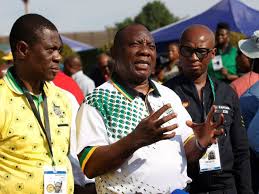 South African President Cyril Ramaphosa will on Thursday meet officials from the labour ministry to discuss the planned introduction of a national minimum wage, a day after nationwide protests over the policy which he has championed.

Several thousand union members marched in Johannesburg, Cape Town, Durban and other cities on Wednesday to voice their opposition to the 20 rand ($1.6) an hour minimum wage, which they have called “starvation wages”.

Ramaphosa sees the minimum pay, which was meant to be introduced on May 1 but has been delayed, as an important first step to tackle labour instability and wage inequality.

The president recognises that the national minimum wage is not a living wage, but we need to start somewhere.

He has staked his reputation on revamping a stuttering economy and rooting out corruption associated with Jacob Zuma, whom he replaced as president in February.

Ramaphosa’s spokeswoman, Khusela Diko, said his meeting with the labour ministry on Thursday was not a response to Wednesday’s protests but was part of regular updates he had been receiving on the minimum wage.

Protesters on Wednesday called for the proposed hourly wage to be scrapped and replaced with a “living wage” of 12,500 rand ($1,000) a month. That wage would be more than three times higher than the 20 rand an hour minimum wage in monthly terms.

“The president recognises that the national minimum wage is not a living wage, but we need to start somewhere,” Ramaphosa’s spokeswoman Diko said.

Labour ministry spokesman Teboho Thejane said the ministry had received a memorandum from protesters on Wednesday and that officials hoped to finalise amendments to minimum wage legislation with lawmakers by August.

Thejane did not give an estimate for the new implementation date of the minimum wage, which was approved by the cabinet under former president Zuma in November after lengthy discussions with unions and employers.