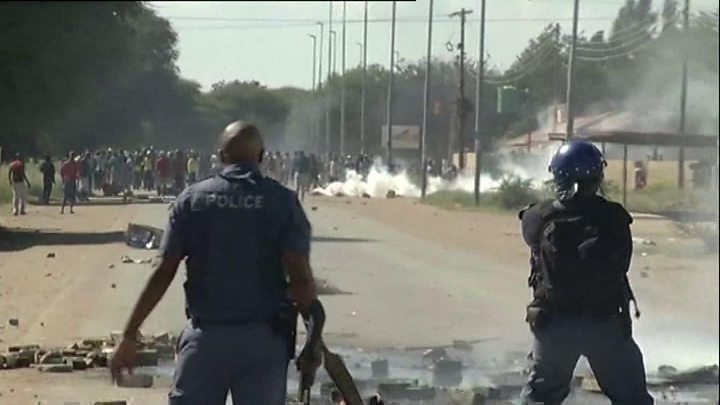 Shops were looted, roads were blocked and vehicles set alight in North West province on Friday in unrest over alleged government corruption and poor public services. At least 23 people were arrested and one man was reported to have died in sporadic violence that erupted this week in Mahikeng, the provincial capital.

Ramaphosa, who came to power in February, called for calm following more than six hours of talks with local leaders in the city of Mahikeng. North West province has been a hotbed of unrest due to boiling frustration over lack of housing, health services and jobs.

Police fired rubber bullets as protesters hid behind cardboard sheets, while roads were littered with burning tyres and bricks that had been thrown through the air.

At the end of the talks Ramaphosa appealed for an end to the unrest, promising a “speedy” resolution of the crisis. “Let us be calm, let us return to a position of normalcy as we address this matter and reach finality on it,” he said in an address broadcast live from the city.

He said he had been made to understand during the talks that the unrest had been sparked by concerns over the position of the provincial premier, corruption and governance.

“These are matters that are serious enough” to warrant broad consultation in the party and the national government “on an urgent basis”, he said.

“We are going to act as speedily as possible to address each of the issues that have been raised,” he added.

The trigger for the unrest was reportedly the death on Tuesday of two patients at a health clinic that was closed due to a month-long dispute over health workers’ salaries and contracts.

Much of the anger has been directed at Supra Mahumapelo, the provincial premier, who is accused of involvement in graft scandals that have engulfed the ruling ANC party.

The border to neighbouring Botswana was closed due to the violence, while schools, shops, offices and government services across North West province were shut.

“They have taken advantage of the political situation as people plead for the removal of Mahumapelo. This has been simmering for months.”

Thapelo Galeboe, member of the local Communist party branch, said the premier ruled “like an emperor” in the province. “The health system has completely collapsed. Hospitals are filthy. Families close to the premier have benefited in a very corrupt manner from tenders,” he said.

The ANC forced Zuma from office in February largely due to his mounting legal challenges and multiple corruption scandals, and the party has distanced itself from its former leader.

Ramaphosa has vowed to crack down on government corruption, which he has admitted is a serious problem, and improve South Africa’s ability to attract foreign investment.

Unemployment is at a record high of about 28%, with youth unemployment reaching over 50% in many areas.

Zuma appeared in court earlier this month at a preliminary hearing on graft charges that he denies.