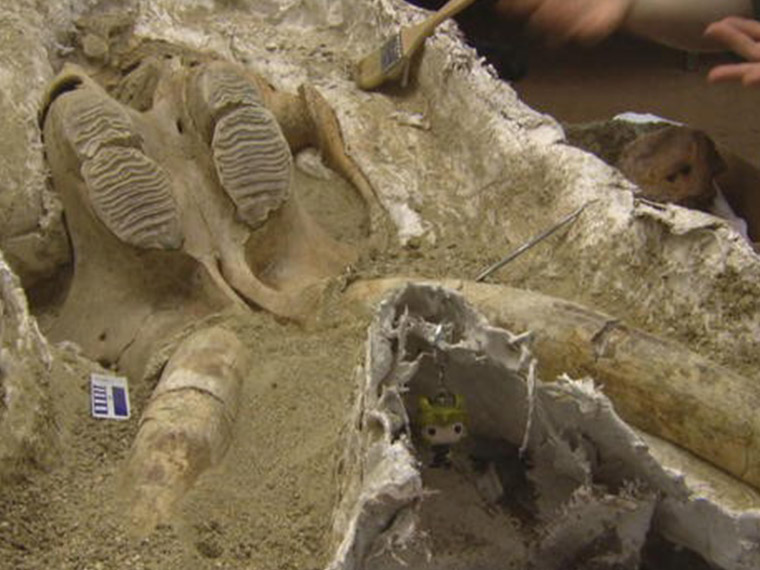 One of the largest subway construction projects in the country is providing a window into Los Angeles’ ancient past. Archaeologists have been unearthing the bones of prehistoric mammals and recently uncovered a whole new treasure trove of fossils. CBS News’ Carter Evans first met paleontologist Dr. Ashley Leger last summer, 40 feet underground, where she leads a group of archaeologists in one of the most unusual digs in the country.

Leger is still deep in the dig.

“We’ve got mammoths and mastodons on one end. We’re finding horses over here. It’s been really fun,” Leger said.

The discoveries paint a picture of what Los Angeles looked like tens of thousands of years ago.

“This treasure trove is coming out of an area where you don’t usually get to dig a giant 80-foot-deep pit,” Leger said.

First they found bones of Columbian mammoths that roamed in herds during the Ice Age. They uncovered a three-foot section of tusk and a rare nearly complete skull.

A nearly complete skull from a Columbian mammoth.

“This is the bucket list you always want to find at some point in your career and then it’s one of the first things we found here,” Leger said.

One of the first but certainly not the last. They just made another unusual discovery: a bone from a giant sloth.

“You think sloth, you think slow-moving, small, cuddly … These are huge. They’re taller than I am,” Leger said.

Last summer, Leger was expecting to see a dramatic increase in fossils as construction approached the tar pits. The prehistoric black ooze that still seeps from the ground was a sticky death trap for the massive mammals that once roamed here.

But for months, nothing materialized. Then, suddenly, new discoveries exploded as the digging moved into Beverly Hills. Leger said she can barely keep up and, in fact, hasn’t even had a chance to identify them all. People are bringing her bones almost every single day. Inside the museum’s collection room, Leger has a new bounty of bones to catalogue.

“I can take a field trip, spend an afternoon in the collection, and try to figure out what it looks like, what it matches up to, and at the end of the day say, ‘Ah-ha. It’s this animal. See?'”

Other new unique finds were an arm bone from an ancient sea otter — and whale bones.

It’s hard to imagine, but about 25 feet below the shops of Beverly Hills, mammoths and bison roamed tens of thousands of years ago. But 80 feet down, hundreds of thousands years earlier, Los Angeles was underwater.

“I see the history of Los Angeles … Hundreds of thousands of years ago, animals like whales were swimming in the ocean that was in that exact same area,” Leger said. “Yes, it’s mind blowing to think about, but really exciting.”

Subway construction will continue for several more years — building the future while Leger’s team works to preserve L.A.’s prehistoric past.

“Fossils are always rare. We estimate that less than 1 percent of life on Earth actually fossilizes. So the fact that we get anything is incredible,” Leger said.