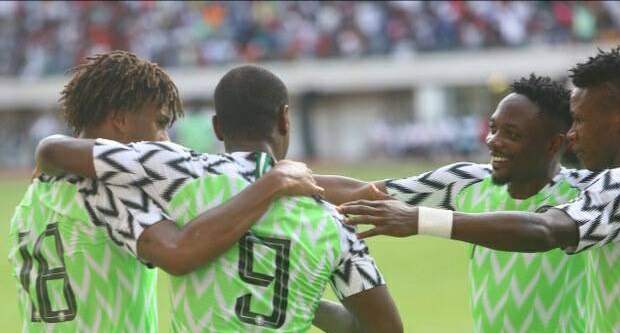 A hat trick from China-based Odion Ighalo and one goal from Samuel Kalu gave Nigeria’s Super Eagles a 4-0 win over Libya in a 2019 AFCON Qualifier in Uyo.

The victory moved the Eagles into second place in Group E, behind leaders South Africa.

The Eagles now have six points from three matches, one point behind South Africa who earlier in the day mauled visiting Seychelles in Johannesburg 6-0.

Ighalo converted a fourth-minute spot-kick after being fouled and rounded goalkeeper Mohamed Nashnush to tap in and double the lead on 58 minutes.

When a Libyan failed to cut off a low cross, former Watford striker Ighalo scrambled the ball into the net to complete his hat-trick with a quarter of the qualifier remaining.

A last-minute Samuel Kalu goal completed the rout of the ‘Mediterranean Knights’, whose Belgian coach Adel Amrouche quit this week over unpaid salaries.