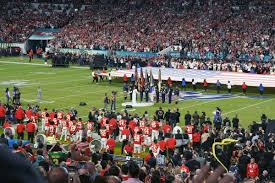 The long wait is over for Kansas City. The Chiefs are Super Bowl champions for the first time in 50 years.

After a slow start in Super Bowl LIV, the Chiefs pulled off yet another double-digit comeback in the playoffs.

The Chiefs, led by quarterback Patrick Mahomes, navigated the 49ers’ defensive pressure by the fourth quarter. His two long touchdown passes took the Chiefs to a 31-20 victory Sunday over the San Francisco 49ers.

“We never lost faith,” Mahomes said. “That’s the biggest thing. Everybody on this team, no one had their head down. We believed in each other.”

“This is what it’s all about,” Reid said. “What a great team, great coaches. Appreciate every bit of it.”

Early on, the 49ers dominated possession. Quarterback Jimmy Garoppolo made the first mistake — as he sometimes does — when he threw up the ball under a heavy rush and it was intercepted.

But the 49ers returned with a drive and scored on a catch-and-run by the tough fullback Kyle Juszczyk.

The Chiefs entered the game as an offensive juggernaut pitted against one of the NFL’s most dominant defensive teams over the past season.

By the second half, it was a toss-up, just as oddsmakers figured; the Chiefs opened the game as a 1-point favorite over the 49ers.