A portrait of former US President Bill Clinton wearing a dress was found hanging in the Manhattan mansion of billionaire paedophile Jeffrey Epstein, who was recently found dead in his prison cell.

The painting showed the former president lounging on a chair in the Oval Office wearing red heels and a blue dress reminiscent of a famous Monica Lewinsky outfit.

The picture was in a room off the stairway of the Upper East Side townhouse, according to DailyMailTV. The dress is also similar to one worn by Hillary Clinton at the 2009 Kennedy Center Honors. 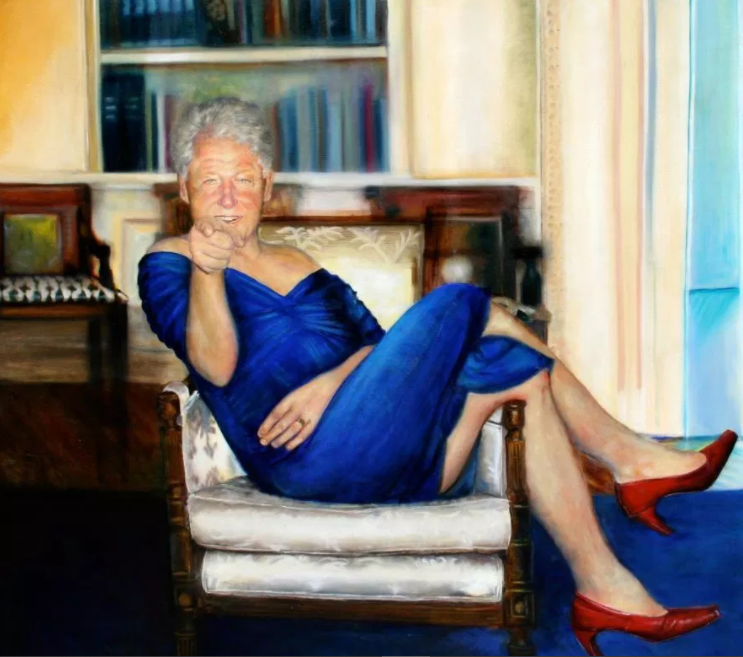 The original painting is by Australian-American artist Petrina Ryan-Kleid, although it is unclear if Epstein had bought the canvas or had a print mounted.

The painting was secretly photographed inside the paedophile’s $56 million home in October 2012. An anonymous source told DailyMailTV that they were visiting the disgraced financier to present a business proposal when she spotted the portrait.

She told DailyMailTV: “It was absolutely Bill Clinton. It was shocking – it was definitely a painting of him. It was a very provocative, sexual picture. He was wearing heels, a blue dress and his hand was in a weird position.”

The color of the dress is thought to be a reference to Clinton’s former White House intern Monica Lewinsky with whom he had an affair, Daily Mirror reports.

Epstein and Clinton were once friends, with the Clinton flying on the now deceased financier’s private plane, dubbed the Lolita Express, several times and on his own account vising the town house once – making it possible he could have seen the bizarre painting.

Clinton has however denied being on Epstein’s so-called “paedophile island,” Little St. James.

Epstein was found hanged in his cell in a New York jail at the weekend and an investigation into his death is ongoing.