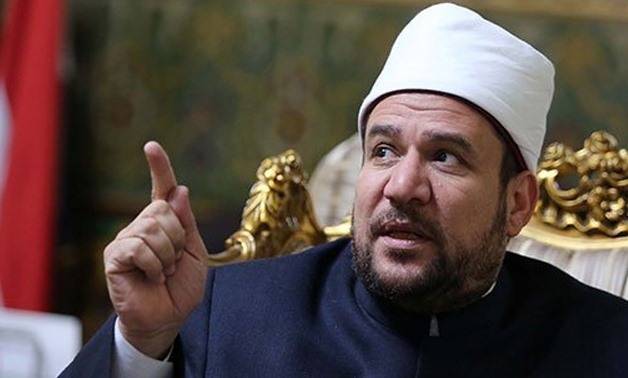 There is no religious text that forbids faith in political or religious diversity said Egyptian Minister of Religious Endowments, Mokhtar Gomaa, during a seminar he gave Saturday at Al Wafd Party’s headquarters.

Newly elected chairman of Al Wafd Party, Bahaa el-Din Abu Shoka, said in accordance with Gomaa that Islam has established the main principals of democracy since its dawn. He added that all of the state’s institutions, such as Al Azhar, the state-run media and the Ministry of Religious Endowments, should cooperate amid the ongoing battle against terrorism.

Gomaa said that an individual has the freedom to discuss and doubt any religious text as long as it is not a verse from the Quran or words of the Prophet Mohammed. The Minister of Religious Endowments added that Islam is a religion which obliges its followers to use their minds and adhere to what they decide.

Gomaa revealed that the ministry is implementing a strategy to renew religious discourse. The ministry’s preachers are learning foreign languages including French, English, German and Spanish, in order to have better access to various knowledge sources.

In accordance with the current strategy, the ministry has published a book titled “Protection of Churches in Islam”, continued Gomaa.

Egyptian churches have been a target of deadly terrorist attacks since the ousting of former President Mohammed Morsi. Terrorist elements in Egypt have been insistently blaming the Christian minority for Morsi’s overthrow.

In one the deadliest attacks on churches in Egypt, twin suicide bombings took place on Palm Sunday in April 2017, targeting both the St. George’s Church in the northern Egyptian city of Tanta on the Nile Delta, and the Saint Mark’s Coptic Orthodox Cathedral, the principal church in Alexandria.

The attacks left 45 dead and 126 injured. Another attack took place in December 2017, when a gunman stormed a Coptic Orthodox church, east of Cairo, killing 11, including victims from the security personnel. ISIS claimed responsibility for both attacks.