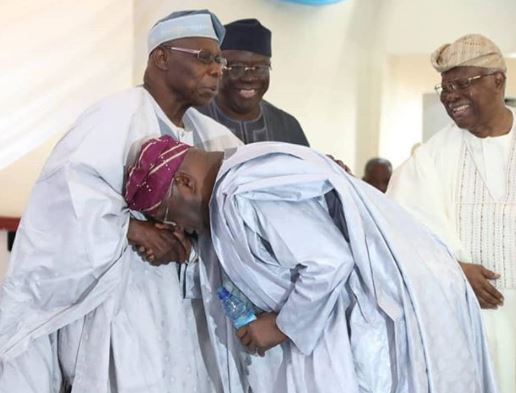 Mr Obasanjo in a statement to commemorate the 75th anniversary of Lagos Island Club said he has been called several names for sticking his neck for his former deputy.

A copy of the statement was sent to PREMIUM TIMES Wednesday afternoon.

Mr Obasanjo, recently, has come under criticism for publicly supporting Mr Abubakar’s presidential bid despite repeatedly calling him a corrupt person in the past.

Mr Obasanjo had in the past described Mr Abubakar as a ‘shameless liar’ and said God would never forgive him if he supports Mr Abubakar’s presidential bid.

He has since announced that he has forgiven Mr Abubakar after the intervention of some clerics.

In his Wednesday statement, Mr Obasanjo said he has not retracted his words on Mr Abubakar but that the presidential candidate “has done three things which are absolutely imperative for a leader to be followed and believed.”

“First, know who you are and present yourself as you are – a human being in blood and flesh and susceptible to human mistakes and human frailties. Don’t cover up with sanctimonious veneer of bogus integrity, incorruptibility, uprightness, goodness and false figures and statistics, all of which are contrived to deceive, to cheat, to plunder and to destroy.

“Atiku never claimed to be a saint and I never described him as such. I will never so describe any human being alive let alone calling him a Messiah. On an occasion in the past when I said that someone was not a Messiah, some Nigerians out of bad belle were up in arms. For me, as a Christian, the only Messiah I know and have is Jesus Christ and even then, the man aspect of Him was imperfect while the divine aspect of Him was perfectly messianic.

“Secondly, a leader must be honest to himself and to the people he serves or he wants to serve. He must identify and acknowledge his situation, mistakes, shortcomings and inadequacy; show remorse where and when he has erred, seek forgiveness and repent; and not passing the bulk or keep blaming others and fail to accept responsibility. Atiku accepts responsibility for his mistakes, shows remorse and seeks forgiveness from his political party and subsequently from Nigerians. He asks for forgiveness from me and as a believer, a Christian as such, I forgave him in accordance with the teaching and instruction of my Saviour, “For if you forgive men when they sin against you, your Heavenly Father will also forgive you. But if you do not forgive men their sins, your Father will not forgive your sins (Matt 6:14-15 NIV). If anybody blames me for forgiving Atiku, I leave such a person with God Almighty, especially as both Christian and Islamic clerics joined Atiku to visit me to seek forgiveness. Anybody who does not forgive when forgiveness is sought with contrite heart cannot be a true believer and should not expect the forgiveness of God.

“Thirdly, as a leader, you must understand the fundamentals of the problems you have to solve and be courageous, visionary and ready to reach out sufficiently to build a credible team of experts, knowledgeable men and women, concerned and interested citizens and non-citizens to work hard and tirelessly for solutions that will benefit all Nigerians and indeed Africans and humanity. He must have ability to build a credible team, lead them, listen to them and give them enough leeway to achieve and make meaningful contribution without abdicating his responsibility. He must be accessible to them. From my personal knowledge of Atiku, he has these qualities.”

The former president said that both Muhammadu Buhari, the candidate of the All Progressives Congress (APC) and Atiku Abubakar of the PDP ‘have issues’ but one is better than the other.

“I must reiterate that Atiku is not a saint and who is? But from what I know of Atiku, he will be a performer in all respects. I can say that again from my personal experience. He knows the problems and he handled some of them or similar and in the past. We now know that both Buhari and Atiku have issues and all of us as human beings have one issue or the other in different magnitude but judging both of them empirically and for the task at hand, Atiku will perform much better than Buhari and he will seek for good and able people around the country and beyond and make use of them to achieve his mission and vision for the general good of Nigerians and the country. He will be a team leader but will not allow the seizure of his mandate by a cabal. A system to prevent impunity and ‘I can do what I like’ attitude and action must be put in place for all concerned. It is more than check and balance, rather it is for the good of all stakeholders and equity-holders.”

Mr Obasanjo also used the opportunity to discredit a claim that he never allowed Mr Abubakar to preside over the Federal Executive Council meeting while they were at the helms of affairs. In doing so, he took a jibe at Mr Buhari.

“One of the most ridiculous claims I have heard on these issues is that I did not give Atiku chance to preside over the Federal Executive Council because I did not trust him. That was not correct because he had occasions to preside on a few times that I was out of the country on duty. On those occasions, he was in charge of the Federal Executive Council meetings. And no Nigerian Chief Executive has devolved to his deputy as much as I did to Atiku. I did not need to designate him Acting President because the Constitution is clear, once the President is not available, the Vice-President automatically acts with full powers and he consults where and if he considers it necessary. But since I was not absent from home for 104 days at a time, people may not know that Atiku actually stood in for me whenever I was out.”