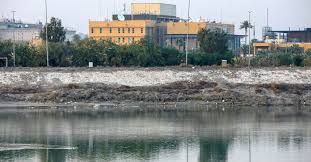 The US embassy in Baghdad’s heavily fortified Green Zone came under attack from rocket fire on Sunday evening.

Five rockets crashed into a riverbank near the embassy in the Iraqi capital without causing any injuries, the US Joint Operations Command said in a statement, but AFP news agency citing a security source said three of the rockets “directly hit the US embassy”. One slammed into a cafeteria at dinner time, it added.

If confirmed, the attack would mark the first time the complex had been directly hit in the third attack against the embassy this month.

Caretaker Prime Minister Adel Abdul Mahdi swiftly condemned the attack in a statement, calling it an “aggression” that could “drag Iraq into becoming a war zone”.

In a statement, the United States urged Iraq to protect the embassy.

“We call on the Government of Iraq to fulfill its obligations to protect our diplomatic facilities,” a State Department spokesperson said in a statement.

Wathiq al-Hashemi, an Iraqi political analyst, told Al Jazeera that the attack was an “embarrassment” for the government of Abdul Mahdi, who resigned in November under pressure from Iraq’s months-long protest movement demanding an overhaul of the country’s political system.

“Abdul Mahdi’s position is not one to envy. He had told armed groups to stop these kinds of attacks on the US embassy, but to no avail,” al-Hashemi said.

“What is interesting to note is that the pro-Iranian militias have denied any role in this attack, saying they did not target the embassy and that it could have been other armed groups. I expect there will be a US response but it remains to be seen whether it will be a military one or not.”