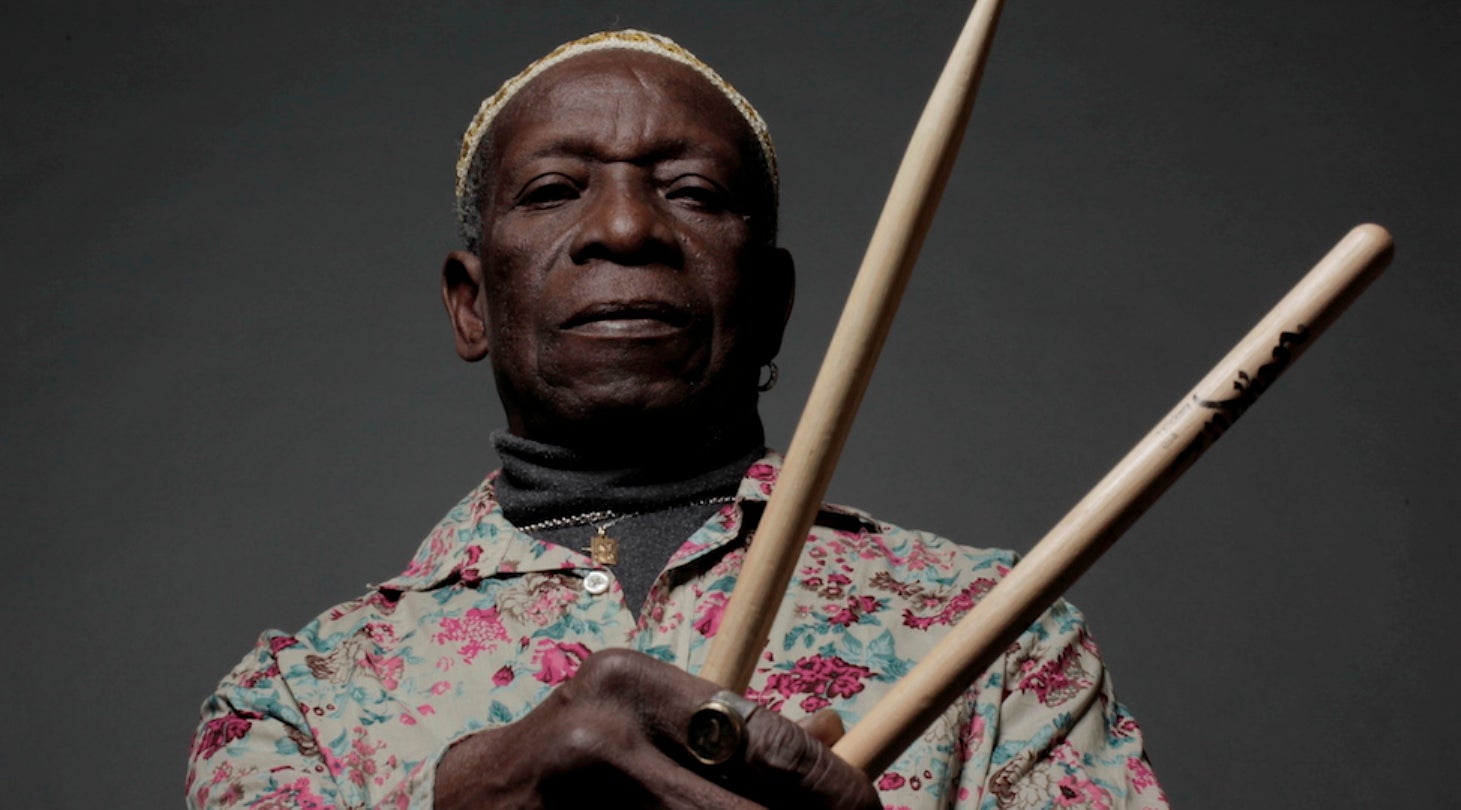 Tony Allen, the pioneering drummer who helped define Afrobeat during his tenure with Fela Kuti, died Thursday evening. He was 79.

Allen’s manager, Eric Trosser, confirmed the musician’s death to Rolling Stone, adding that Allen was taken to Georges Pompidou European Hospital in Paris, where he died of abdominal aortic aneurysm. “He was in great shape,” Trosser added to France 24. “It was quite sudden.” Sahara Reporters first reported Allen’s death.

As a member of Kuti’s band Africa 70, Allen helped revolutionize the art of drumming, simultaneously anchoring and propelling classic albums like 1973’s Gentleman, 1975’s Expensive Shit, and the Afrobeat legend’s most enduring work, 1976’s Zombie. Each release depended on Allen’s slippery, ferocious, polyrhythmic grooves. “Without Tony Allen, there would be no Afrobeat,” Kuti once said. Damon Albarn and Brian Eno were also famously enamored with Allen’s playing; Eno called him “one of the great musicians of the 20th century — and the 21st.”

Allen was born in Lagos, Nigeria; he didn’t pick up the sticks until his late teens. He studied the work of a variety of jazz drummers, from Art Blakey to Elvin Jones to Philly Joe Jones to Gene Krupa. Speaking with The Wire, Allen credited Max Roach with turning him on to the potential of the hi-hat, which he believed many of his peers were neglecting. Allen later met the drummer Frank Butler, who influenced him to practice drumming on pillows. “It adds flexibility,” he told The Guardian. Allen also picked up a wide-ranging musical education on the club circuit in Nigeria. “Latin American, African horns, jazz, highlife… you had to be able to play it all, because in the club they asked for it,” Allen said. He played in an outfit dubbed the Cool Cats and then moved on to help better known highlife artists like Victor Olaiya.

Allen went on to serve as the drummer in Kuti’s band Koola Lobitos. Initially, listeners weren’t sure what to make of the group. “It was like a revolutionary music style coming to the country,” Allen explained. “They were used to the highlife thing… It was kind of strange for the people.”

After a visit to the United States in 1969, Allen and Kuti began to cement the endlessly copied sound of Afrobeat. This was full-band dance music, boosted by searing, intricate horn parts, scratchy, relentless guitar, and agitated, hyperactive bass lines. Like American funk, each instrument could function as a percussive engine, driving the song forward, but Afrobeat made more room for solos and inventive melodic digressions that sprawled out over 10, 12, or 17 minutes.

Allen was the whirlwind at the center of it all, producing a darting web of rhythm, invigorating but never overpowering, that entranced generations of musicians. “I was accustomed to a hard and rigid sort of drive in the drums,” Meshell Ndegeocello said in 2017. “Hearing Tony Allen really opened my mind up to fluidity and the understanding of agility within the pulse.”

Eno bought a Kuti album on a whim in a London record shop in the early Seventies. “I think I liked the cover, and I think I liked the fact that the band had so many members,” he told The Vinyl Factory in 2014. “It changed my whole feeling about what music could be… when I first met Talking Heads and we were talking about working together, I played [Kuti’s 1973 album Afrodisiac] for them and said: This is the music of the future.”

“I love the density of the weave between the players,” Eno added. “I love the relationship of discipline and freedom shown in this. It’s not jamming in the do-whatever-you-like sense. But it’s not constrained parts in the orchestral sense either.”

Allen and Kuti were a prolific and indefatigable team for over a decade. Kuti released multiple albums a year with ease. He was also a tireless performer. “We’d play six hours a night, four days of the week with Fela,” Allen told Clash. “That’s what the people want.”

Kuti quickly became known for his blunt condemnations of government corruption and ineptitude. “What [Fela] was challenging, he was right,” Allen said in 2016. “But it was too direct and that’s why he got all this shit. There were too many arrests, too many bombardments. You’re a musician — why do you leave yourself to be beaten up all the time like that?” Government retaliations against Kuti became increasingly fierce, and Allen decided to strike out on his own in 1978.

In addition to his work with Kuti, Allen was known for his collaborations with Albarn: Allen was a member of The Good, The Bad and the Queen alongside Albarn, the Clash’s Paul Simonon, and the Verve’s Simon Tong. That band releasing a pair of albums, a self-titled 2007 LP and 2018’s Merrie Land. Allen, Albarn and Red Hot Chili Peppers bassist Flea — under the moniker Rocket Juice & The Moon — also released a collaborative album in 2012.

“The greatest drummer on Earth has left us,” Flea wrote on Instagram. “What a wildman, with a massive, kind and free heart and the deepest one-of-a-kind groove. Fela Kuti did not invent afrobeat, Fela and Tony birthed it together. Without Tony Allen there is NO afrobeat.”

In recent years, Allen reconnected with his jazz roots, recording a tribute EP for his “hero” Art Blakey and teaming up with Jeff Mills for 2018’s Tomorrow Comes the Harvest. Earlier this year, Allen released Rejoice, a collaboration with late South African trumpeter Hugh Masekela.

“Today, we’ve just lost the best drummer that has ever lived,” Mills said in a statement. “Rhythms and patterns so complex and on such a high level of communication, there are not words yet created to describe what he created. It was otherworldly. He was otherworldly! A master musician and a master thinker.”

While many listeners think drumming and clobbering a rhythm are synonymous, Allen never felt that way. “Some drummers don’t know what it means to play soft, it’s not in their book,” he said in 2016. “I know I can make my drums bring the house down if I have to. But I know how to make it subtle. You listen to it flowing like a river.”

Culled from the RollingStone