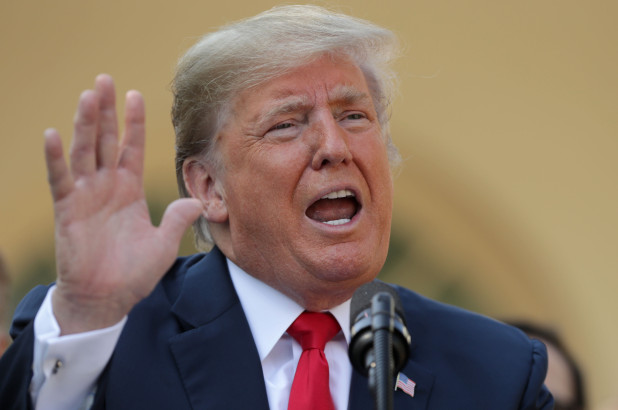 US President Donald Trump on Wednesday shrugged off a New York Times investigation that concluded he made his fortune with the help of more than $400 million from his parents, partly through tax schemes, as a boring, rehashed “hit piece.”

Trump has often boasted that he built a multi-billion dollar real estate empire from a $1 million loan from his father, Fred, himself a prominent New York builder.

But the Times reviewed more than 100,000 documents including confidential tax returns and financial records that it said showed he actually received at least $413 million in today’s money, in part through schemes to avoid taxes.

“They used the concept of ‘time value of money’ in doing a very old, boring and often told hit piece on me,” he tweeted.

“Added up, this means that 97% of their stories on me are bad. Never recovered from bad election call!”

The Times story said that from the time Trump was a toddler, his father funneled millions of dollars to his four children through a sham corporation to avoid gift taxes.

And he helped devise a scheme that undervalued his parents’ real estate holdings by hundreds of millions of dollars, sharply reducing taxes on those properties when they were transferred to their children, according to the paper.

“There was no fraud or tax evasion by anyone. The facts upon which The Times bases its false allegations are extremely inaccurate,” he added.

“President Trump had virtually no involvement whatsoever with these matters.”

“I will say one thing the article did get right was that it showed that the president’s father had a great deal of confidence in him.

“The president brought his father into a lot of deals and they made a lot of money together. His father went on to say that everything he touched turned to gold.”

The paper’s contention that Trump was earning as much as $200,000 a year in today’s money by the time he was three years old, and was the equivalent of a millionaire by the age of eight, drew considerable attention.

The assertion was pounced on by several late night talk show hosts, including comedian Stephen Colbert, the host of “The Late Show” on CBS.

“So, let me get this straight: At one point, Donald Trump was an extraordinarily wealthy toddler. And today? He is still that,” he said.

Not everything, however, was a laughing matter: The Times said Trump’s tax-hating father used various methods to funnel his wealth to his children and shield it from the Internal Revenue Service, some of which tax experts said was improper or possibly illegal.

Following the article’s publication, the New York State Department of Taxation and Finance announced it was “reviewing the allegations in the NYT article and is vigorously pursuing all appropriate avenues of investigation.”

Speculation about the source of Trump’s wealth has mounted since 2015, when he declared his candidacy for the nation’s highest office but broke with long-standing tradition by refusing to release his tax returns.

He has been repeatedly rebuked over ethics violations for refusing to divest his assets in the Trump Organisation, instead turning over control of the entity to his sons, Donald Jr and Eric.

In July, a federal judge allowed to proceed a suit accusing Trump of violating the constitution by maintaining his interest in a hotel that does business with foreign governments.

It marked the first time a court interpreted anti-corruption clauses in the constitution, known as emoluments clauses, and applied them to a sitting president.