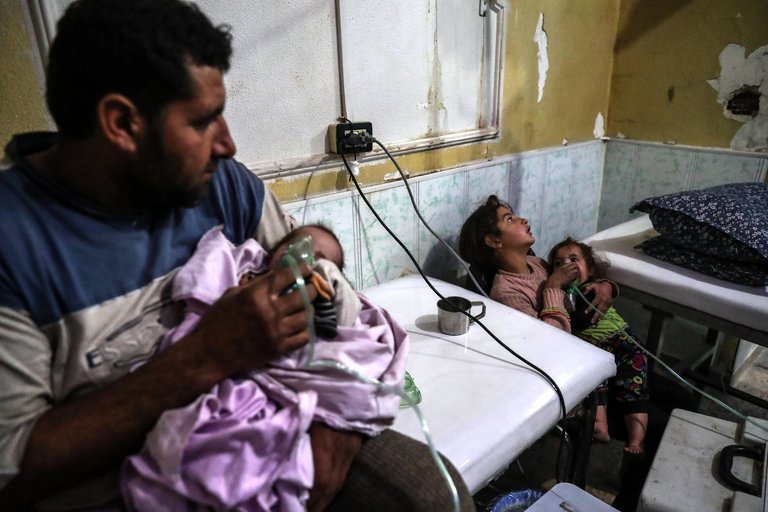 U.S. President Donald Trump said there would be a “big price to pay” for a chemical attack against a besieged rebel-held town in Syria where medical aid groups reported dozens of people were killed by poison gas.

A joint statement by the medical relief organization Syrian American Medical Society (SAMS) and the civil defense service, which operates in rebel-held areas, said 49 people had died in the attack late on Saturday in the town of Douma. Others put the toll even higher.

“Many dead, including women and children, in mindless CHEMICAL attack in Syria. Area of atrocity is in lockdown and encircled by Syrian Army, making it completely inaccessible to outside world. President Putin, Russia and Iran are responsible for backing Animal Assad. Big price to pay,” Trump wrote on Twitter.

The Russian Foreign Ministry warned against any military action on the basis of “invented and fabricated excuses”, saying this could lead to severe consequences.

The United States launched a cruise missile strike on a Syrian air base last year in response to a sarin gas attack in northwestern Syria blamed on Assad.

One of Trump’s top homeland security advisers said on Sunday the United States would not rule out launching another missile attack. “I wouldn’t take anything off the table,” White House Homeland Security and Counterterrorism Adviser Thomas Bossert said in an interview on ABC’s “This Week.”

“We are looking into the attack at this point,” he said, adding that the photos of the incident are “horrible.”

In one video shared by activists, the lifeless bodies of around a dozen children, women and men, some of them with foam at the mouth, were seen. “Douma city, April 7 … there is a strong smell here,” a voice can be heard saying.

Reuters could not independently verify the reports.

Douma is in the eastern Ghouta region near Damascus. Assad has won back control of nearly all of eastern Ghouta in a Russian-backed military campaign that began in February, leaving just Douma in rebel hands.

The Ghouta offensive has been one of the deadliest in Syria’s seven-year-long war, killing more than 1,600 civilians, according to the Syrian Observatory for Human Rights.

Facing military defeat, rebel groups in other parts of eastern Ghouta have taken safe passage to other opposition-held areas at the Turkish border. Until now, Jaish al-Islam has rejected that option, demanding it be allowed to stay in Douma.

Syrian state media said on Sunday a deal had been struck under which Jaish al-Islam would finally leave for the town of Jarablus after saying the group had asked for negotiations.

There was no immediate comment from Jaish al-Islam, which has been one of the most prominent insurgent groups in the war.

A pro-Syrian opposition TV station, Orient, said earlier talks were under way between Jaish al-Islam and Russia to reach a final settlement for Douma.

Taking Douma would seal Assad’s biggest victory since 2016, and underline his unassailable position in the war that has killed hundreds of thousands of people since it mushroomed from protests against his rule in 2011.

The Syrian Observatory monitoring group said it could not confirm whether chemical weapons had been used in the attack on Saturday. Observatory Director Rami Abdulrahman said 11 people had died in Douma as a result of suffocation caused by heavy bombardment.

Basel Termanini, the U.S.-based vice president of SAMS, which operates medical facilities and supports medics in Syria, told Reuters another 35 people had been killed at a nearby apartment building, most of them women and children.

The joint statement from SAMS and the civil defense said medical centers had taken in more than 500 people suffering breathing difficulties, frothing from the mouth and smelling of chlorine.

One of the victims was dead on arrival and six died later, it said. Civil defense volunteers reported more than 42 cases of people dead at their homes showing the same symptoms, it said.

Tawfik Chamaa, a Geneva-based Syrian doctor with the Syria-focused Union of Medical Care and Relief Organizations (UOSSM), a network of Syrian doctors, said 150 people were confirmed dead and the number was growing. “The majority were civilians, women and children trapped in underground shelters,” he told Reuters.

The Syrian government has repeatedly denied using chemical weapons during the conflict.

“We have received reports of many people killed and injured in Duma in the past 24 hours. We continue to be extremely concerned for people who remain in Douma who are being subjected to escalating hostilities,” U.N. Office for the Coordination of Humanitarian Affairs spokeswoman Linda Tom said.