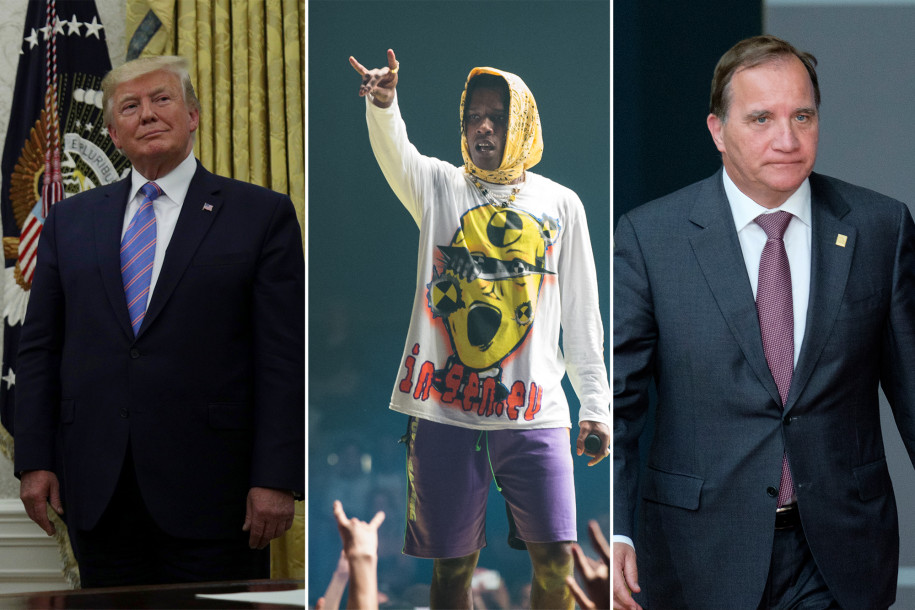 President Trump complained Thursday that Swedish authorities had charged A$AP Rocky with assault in connection with a street brawl he was involved in last month in Stockholm – despite the president’s appeal that he be released.

“Very disappointed in Prime Minister Stefan Löfven for being unable to act. Sweden has let our African American Community down in the United States. I watched the tapes of A$AP Rocky, and he was being followed and harassed by troublemakers. Treat Americans fairly!” the commander in chief tweeted.

“Give A$AP Rocky his FREEDOM. We do so much for Sweden but it doesn’t seem to work the other way around. Sweden should focus on its real crime problem! #FreeRocky,” he added in a follow-up missive.

The Grammy-nominated artist, whose real name is Rakim Mayers, has been held by police along with two others since July 3 following the fracas in the Swedish capital June 30.

In a statement, prosecutor Daniel Suneson said charges against Rocky and the other two were filed because they are “suspected of assault causing actual bodily harm” and that the “events in question constitute a crime.”

All three will remain in custody until trial because, unlike the US, Sweden has no bail system.

A petition seeking their release on change.org has been signed by more than 600,000 people Thursday afternoon.

Suneson recommended that the Stockholm District Court set aside three days for the trial, which could start next Tuesday.

If convicted, Rocky, 30, could spend two years behind bars.

The Harlem-born rapper, who was in Stockholm for a music festival, has claimed he was acting in self-defense during the street melee in which video shows the rapper throwing a man to the ground.

Videos posted on his Instagram account also showed two men harassing Rocky and his security guard for several blocks, and Rocky accusing them of throwing headphones at his bodyguard.

At one point, Rocky says “they keep following us.”

“It is worth noting that I have had access to a greater amount of material than that which has previously been available on the internet,” he said. “In addition to video material, the injured party’s statements have been supported by witness statements.”

“Rakim Mayers feels that he acted in self-defense. He is claiming that he is innocent, and in that perspective he of course is very sad,” Jovicic said.

Trump said in a July 19 tweet that he had spoken to Löfven about Rocky.

Löfven “assured me that American citizen A$AP Rocky will be treated fairly. Likewise, I assured him that A$AP was not a flight risk and offered to personally vouch for his bail, or an alternative,” Trump posted last Saturday.

The prime minister’s press secretary, Toni Eriksson, said the two had a “friendly and respectful” conversation and Löfven assured Trump that Rocky will be treated fairly.

The case also has caught the attention of Kim Kardashian West and Kanye West, Sean “Diddy” Combs and Justin Bieber.