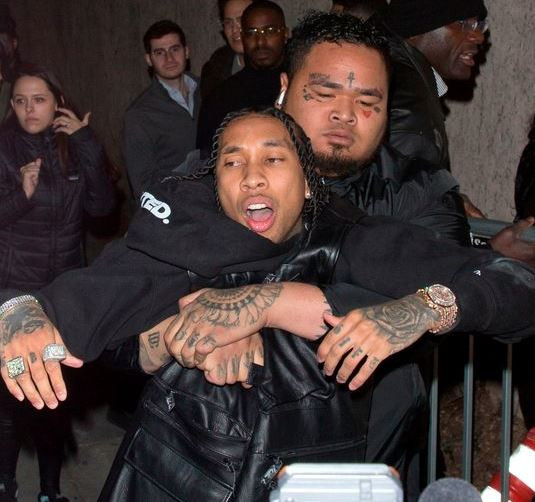 There was as much red carpet drama over Oscars weekend than in any of the films — when Kylie Jenner‘s ex, Tyga, was forcibly dragged out of boxing champ Floyd Mayweather‘s 42nd birthday bash on Saturday night by security after a heated altercation.

According to video of the wild scene, the rapper then tried to reach for his security guard’s gun outside the club, before being coaxed into a car.

Mayweather hosted the starry birthday bash for guests including Tiffany Hadish and French Montana. But when Tyga arrived on the red carpet at Hollywood club Sunset Room, there was an altercation on the packed carpet with an unknown guest.

An unidentified man is seen in video posted by a fan yelling at the rapper. When Tyga responds, the rapper’s own security guard tries to keep the star back — before a scuffle breaks out and Tyga is then grabbed and physically carried out by a different guard at the event.

The rapper was hauled outside by the neck in front of cameras as he yelled, “Bro! Chill out!” at a hulking guard who deposits him on the sidewalk.

Photos outside the club posted by TMZ then clearly captured Tyga reaching under own security guard’s jacket and into a holster to grab for his gun. But the guard kept his hand securely on the piece and put it back.

Tyga was finally convinced to get into a car, and he drove off. But not before one of his pals argued with photographers yelling, “This is some real s–t right now! Turn those cameras off!”

Meantime inside the club, Haddish was seen happily sitting with rapper Montana, who also has connections to the Kardashian clan having dated Khloe.

Also at the party were Larsa Pippen and the champ’s dad Floyd Mayweather Sr.

Birthday boy Mayweather — who had nothing to do with the red carpet drama — arrived to his ’90s-themed bash in a vintage Gucci jacket over a Nautica T-shirt, long cut-off jean shorts, a sideways baseball cap, copious gold chains and took the stage inside.

Tyga reportedly dated Kylie for three years. But after their split, he took some credit for her success saying last year in an interview, “She always had a platform, and she was always destined to be where she was going to be, regardless… But, when I stepped in, and there was a lot of codes being taught, it was like, ‘You could do this. You should start this. You should start doing your hair like this, or you should do this.” But he said, “the universe is going to pay me back.”

She’s since moved on with Travis Scott.

A rep for the event said in a statement: “The video that has been shared in the press and in the media of Tyga being escorted out of the venue was unfortunate and troubling. Though we are unsure of what exactly caused the altercation, we are certain that Floyd Mayweather and TMT were not involved. Tyga had arrived to the venue around 12:30 am, just 10 minutes before being removed. Security took appropriate measures to deescalate the situation and to do what was in the best interest of everyone’s safety.”

A rep for Tyga did not immediately get back to us.