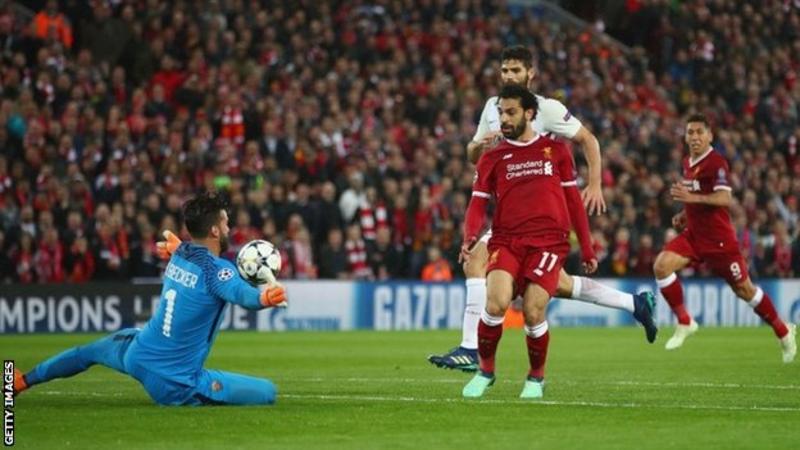 Another Mohamed Salah masterclass helped Liverpool take control of their Champions League semi-final – but two late Roma away goals gave the Italian side a glimmer of hope for the second leg.

Liverpool, who last reached the final in 2007, repeatedly breached the visitors’ naively high defensive line and scored five times in the opening 68 minutes at a raucous Anfield.

Salah, who has now scored 43 goals since his summer move from Roma, scored twice and assisted two other goals.

He curled his first into the top corner from the edge of the box – then clipped the ball over Alisson for a second.

Salah then ran down the right and squared for Sadio Mane to make it 3-0 – before doing the same to set up Roberto Firmino.

Liverpool then became only the second team to score five goals in a Champions League semi-final match when Firmino headed in James Milner’s corner.

With his side leading 5-0, Reds boss Jurgen Klopp took off Salah – and Roma gave themselves a chance for next week’s return leg at the Stadio Olimpico.

And Roma need only look to the last round for inspiration – they lost the first leg in Barcelona 4-1 before winning 3-0 in Italy to progress on away goals.

A repeat of the latter scoreline this time would take them into the final against Bayern Munich or Real Madrid.

Prior to Roma’s late goals, the one sour note for Liverpool was the sight of Alex Oxlade-Chamberlain leaving the field on a stretcher. Klopp said later the England midfielder “probably had a really bad injury”.

When Salah moved to Anfield last summer for £34m after two good seasons for Roma, nobody could have predicted what would follow.

The Egypt winger has scored 43 goals in 48 games for Liverpool – an average of one every 87 minutes – and is the Premier League’s top scorer.

He has netted in his past seven games – including four goals against Watford, and one in both legs of the Champions League quarter-final win over Manchester City. On Sunday, he was named Professional Footballers’ Association Player of the Year.

But it has all been leading up to this night at Anfield.

Roma had no answer to their former player, who opened the scoring off the underside of the bar after Jordan Henderson won the ball from Dzeko, and Mane and Firmino combined to find Salah.

His second came when he found Firmino from the halfway line, then ran forward to latch onto his team-mate’s pass before lifting the ball over Roma keeper Alisson, considered one of the best in the world. He did not celebrate either goal.

Salah then took advantage of Roma’s high defending to get in down the right, perhaps from an offside position, before finding the previously wasteful Mane as Liverpool started to cruise.

He then rolled a ball across the six-yard box for Firmino to score.

With the tie seemingly won, Salah came off to a standing ovation when he was replaced by Danny Ings with 15 minutes left.

But he might need to score again in Rome after the visitors’ late rally.

The Reds, who have won the European Cup or Champions League five times, were beaten by AC Milan in their last final appearance.

With no side having gone through from 5-0 down at the end of the first leg in any European competition, Klopp will be annoyed they have given Roma that little bit of hope.

For an hour they were sublime, and could have scored eight or nine goals.

After a good opening 20 minutes for Roma, Liverpool started to pick them apart and had already missed several good chances before Salah’s opener.

Mane blazed two great chances over the bar from Firmino passes – first when he ran from near the halfway line before shooting over, then from a cut-back.

The Senegal striker then had a goal rightly ruled out for offside from Andrew Robertson’s cross. Between Salah’s goals, Dejan Lovren missed a glorious chance when he headed against the crossbar from close range.

But once Liverpool refined their finishing, Roma looked terrified every time the hosts got the ball.

And even after the visitors’ late double, Liverpool will fancy their chances of being in Kiev for the final on Saturday, 26 May.

Roma looked down and out after 80 minutes – with the only real question appearing to be whether they would concede again.

They had the game’s first chance when Aleksandar Kolarov’s 20-yard drive was weakly touched onto the bar by Loris Karius, who was lucky not to turn it into his own net.

They looked totally out of ideas and hope towards the end, when suddenly Nainggolan’s ball over the top found Dzeko, who smashed the ball home. It looked like it would just be a consolation, but suddenly it was a new match.

Nainggolan, who had been fairly quiet, had a shot from outside the box which Milner handled before Perotti, a substitute, stroked the ball into the opposite corner of the same goal Salah had found to start the mayhem.

Liverpool were hanging on at this stage and Roma almost had a third when Dzeko shot over from distance and Nainggolan’s shot was deflected wide.

The second leg of this tie is next Wednesday, 2 May  but both sides are in league action on Saturday.

Liverpool host Stoke City at Roma, who are battling to qualify for next season’s Champions League, are at home to Chievo later that day