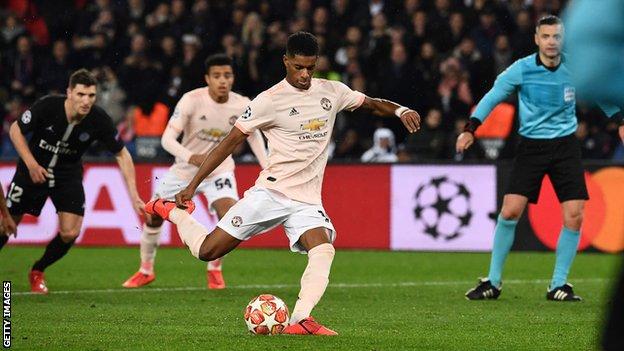 The odds were stacked against United in Paris, but they became the first team in Champions League and European Cup history, at the 107th time of asking, to overcome a 2-0 or greater home first-leg deficit.

Ole Gunnar Solskjaer’s visitors got the perfect start thanks to Romelu Lukaku’s opportunist strike after two minutes, the Belgium striker latching on to Thilo Kehrer’s blind backpass and finding the net.

PSG equalised on the night to move 3-1 ahead on aggregate when Kylian Mbappe fed a pass to the unmarked Juan Bernat, who slotted home at the back post.

The hosts then had a succession of chances, with makeshift right-back Eric Bailly enduring a torrid time in his 35 minutes on the pitch, before injury saw him replaced by Dalot.

The game appeared to be petering out to its conclusion before Dalot’s speculative long-range strike hit the arm of the unfortunate Kimpembe, and after a long delay while the referee consulted his pitch-side monitor, Rashford’s ice-cool penalty sealed a remarkable win.

The draw for the quarter-finals takes place on Friday, 15 March.