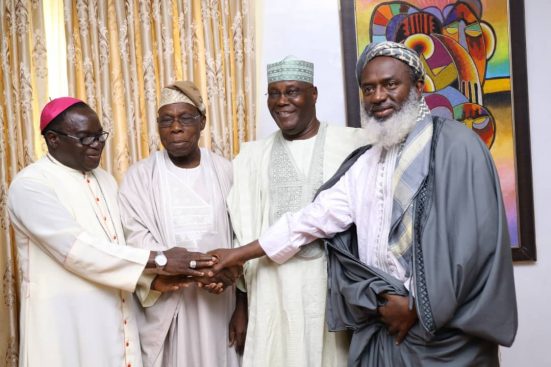 Former President Olusegun Obasanjo has forgiven his former vice, Atiku Abubakar. While speaking when Abubakar and some leaders visited him at his Abeokuta home, he said, “Let me start by congratulating President-to-be, Atiku Abubakar, for his success at the recent PDP Primary and I took note of his gracious remarks in his acceptance speech that it all started here.
Yes, when it started, it was meant for Atiku to succeed Obasanjo. In the presence of these distinguished leaders of goodwill today, let me say it openly that we have reviewed what went wrong on the side of Atiku. And in all honesty, my former Vice-President has re-discovered and re-positioned himself. As I have repeatedly said, it is not so much what you did against me that was the issue but what you did against the Party, the Government and the country.

I took the stand I had taken based on the character and attributes you exhibited in the position you found yourself. I strongly believe that I was right. It was in the overall interest of everyone and everything to take such a position.
From what transpired in the last couple of hours or so, you have shown remorse; you have asked for forgiveness and you have indicated that you have learnt some good lessons and you will mend fences and make amends as necessary and as desirable.
Whenever or wherever you might have offended me, as a Christian who asks for God’s forgiveness of my sins and inadequacies on daily basis, I forgive and I sincerely advise you to learn from the past and do what is right and it will be well with you. There are still areas, nationally and internationally, where you have to mend fences and make amends. You will know how to handle what is already out and what may yet be put out by the opposition. .
.
But, I am convinced that if you continue with the attitude that brought you here with these distinguished leaders of goodwill, with remorse and contrite heart, the rest of the coast within and outside the country can be cleared. And if there is anything I can do and you want me to do in that respect, I will do.”