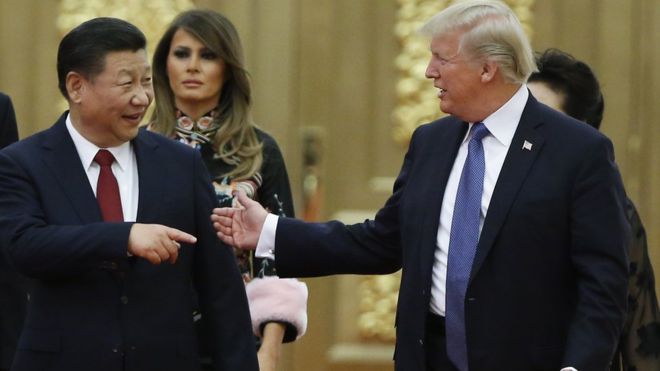 The US and China on Friday launched tit-for-tat tariffs on each other’s imports, the opening shots in what Beijing called “the largest trade war in economic history” between the world’s top two economies.

At the stroke of midnight Washington time, the US pulled the trigger on 25-percent duties on about $34 billion in Chinese machinery, electronics and high-tech equipment, including autos, computer hard drives and LEDs.

Economists have warned escalating trade frictions could throttle global growth and strike at the heart of the world trading system, causing shockwaves across the planet.

Friday’s tariffs could just be the opening skirmishes in the trade war, as US President Donald Trump has vowed to hit as much as $450 billion in Chinese goods, the vast majority of imports.

Months of dialogue between the two economic superpowers appeared to have failed, with Trump warning just hours before the tariffs came into effect that Washington was ready to impose duties on hundreds of billions of dollars more in Chinese imports.

Trump has for years slammed what he describes as Beijing’s underhand economic treatment of the United States, with the US trade deficit in goods with China ballooning to a record $375.2 billion last year.

US officials accuse China of building its emerging industrial dominance by stealing the “crown jewels” of American technological know-how through cyber-theft, forced transfers of intellectual property and state-sponsored corporate acquisitions.

And despite dire warnings about the impact on the US, Trump believes the robust American economy can outlast its rivals in the current battle.

AFP / –The tariffs will affect some $34 billion in goods

But China also believes that its economy, with a greater focus on domestic demand and a reduced dependence on exports, can ride out the storm.

A member of China’s central bank monetary policy committee, Ma Jun, said Friday that the first punches will have a “limited impact” on the Chinese economy.

With only $130 billion in US imports to retaliate against, Beijing has said it will take “qualitative” and “quantitative” measures against the US, triggering fears it could cripple the operations of US multinationals in China.

“A trade war is the last thing we want to see, because we said many times that no one will benefit from a trade war,” said Chinese foreign ministry spokesman Lu Kang.

Chinese stocks actually rose after the announcement, with the benchmark Shanghai Composite Index up nearly one percent and the Shenzhen index climbing more than one percent.

Stocks fell back slightly from that point, with Shanghai closing up half a percentage point.

Li Daxiao, analyst at Yingda Securities, said news of the tariffs was already priced into the market, “therefore investors are not in as much of a panic as before.”

On the streets of Beijing, there were some concerns that prices would rise due to the tariffs but also a determination to support the Beijing authorities in the trade war.

“I will try my best to support domestic products. I think products made in China are the best,” said one shopper in a Beijing grocery story, who gave his name as Yang.

Beijing has accused the US of “firing on the whole world” with the measures, pointing out that most of the Chinese exports under attack are largely made by companies with foreign investment — including from America.

Under the banner of his “America First” policy, Trump has also targeted other traditional trade partners of the US, such as the European Union, Japan, Mexico and even Canada.

And signs are growing that the escalating global trade dispute is already affecting the world’s top economy, with punitive duties now in place for steel and aluminium and the White House threatening to levy duties on auto imports.

As the tariffs approached, the US central bank warned the impending trade battle was beginning to darken the otherwise blue skies of the robust American economy, now in its 10th year of recovery.

Businesses around the United States told the central bank that spending plans had been scaled back or postponed and they also warned of further adverse effects from the trade conflict, according to a Federal Reserve survey.

The start of the trade war also likely confirms the widening rupture between Trump and his own Republican Party, a traditional champion of free trade and big business.