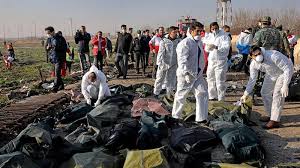 A video has been obtained that appears to show a missile being fired into the Tehran sky and striking an object, around the same time that a Ukrainian plane crashed just after taking off from the city’s airport.

News of the video comes hours after the leaders of Canada and Britain said that they have intelligence that the Ukrainian airliner was shot down by an Iranian surface-to-air missile.
Canadian Prime Minister Justin Trudeau, whose country lost 63 citizens in the crash of Ukrainian International Airlines Flight 752 earlier this week, said Canada’s intelligence, as well as intelligence provided by allies, shows that the commercial aircraft was shot down by an Iranian surface-to-air missile. He called for a thorough investigation into what caused the crash but would not provide additional details about the evidence and intelligence he cited.
“This may have been unintentional,” Trudeau said at a news conference in Ottawa.
Not long after Trudeau’s news conference, British Prime Minister Boris Johnson said his country’s intelligence service had come to the same conclusion.
SOURCE – CNN
Click to rate this post!
[Total: 0 Average: 0]