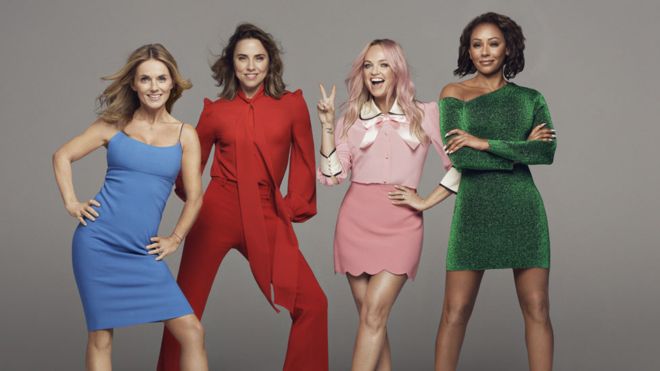 The Spice Girls are to announce their first tour for a decade – but Victoria Beckham won’t be taking part.

Mel B confirmed there would be a world tour, with tickets for the UK dates to go on sale from Friday.

“It’s just the four of us. I hope Victoria will join us at some point,” the star said on ITV’s Loose Women.

Last week, Mel B took a swipe at her bandmate by dressing up as Victoria for Halloween and holding a sign that read: “No I am not going on tour.”

Scary was joined by a friend dressed as David Beckham, who held a sign saying: “Please, please, please do it for the Spice Girls fans.”

Asked what Victoria made of the costume, Mel B said she thought she would find it funny, but also acknowledged the pair’s rocky relationship.

“I think she thought it was funny, there’s a bit of a love-hate relationship there,” she said.

Earlier, Bunton said on her Heart Radio breakfast show that the group would put more details of the tour on social media at 15:00 GMT.

“I’m just so excited, I want it out there. It’ll be brilliant,” Baby Spice told co-host Jamie Theakston.

In February, the five members posted a photo to social media, saying they were planning to work on new projects together.

Since then, rumours have circulated about what they might do, with a tour and new material being just some of the suggestions.

The group last performed as a fivesome at the closing ceremony of the London 2012 Olympic Games.

The girl group originally split in 2000 after performing for two years as a four piece, following Geri’s departure. All five returned for a reunion tour in 2007.