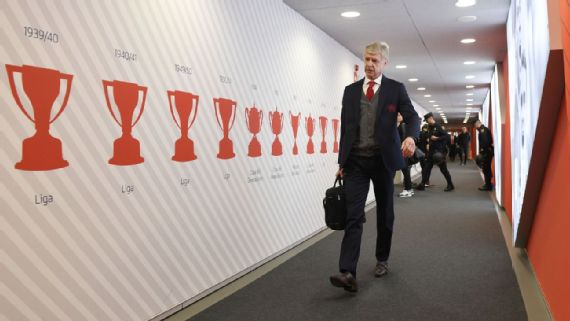 Outgoing Arsenal manager Arsene Wenger admitted he is “very sad to leave the club with this exit” after the Gunners were knocked out of the Europa League by Atletico Madrid on Thursday.

Wenger’s hopes of ending his 22-year reign with at trophy ended with a 1-0 loss that put Atletico through to the final with a 2-1 aggregate score.

It means Arsenal’s season is effectively over, as the three remaining Premier League games will only determine whether the team finishes sixth or seventh — their worst-ever campaign under Wenger.

“I’m very, very sad to leave the club with this exit,” Wenger told a news conference. “I’m like the team, very sad and very disappointed. Overall I’m even very frustrated as well.

“When you go out of a competition and give the performances we did over 180 minutes, it’s very difficult to take.”

Wenger also told BT Sport football “can be very cruel,” adding: “The suffering is very strong tonight.” The loss also means Arsenal will not take part in the Champions League next season for the second consecutive year, after participating in every campaign under Wenger since 1998-99, his second full season in charge.

However, Wenger suggested he believes he’s leaving Arsenal in a good position to return to form.

“Now for the club, they’ve got some time to think about what to do for next season. I think there are some good ingredients in our team and they will bounce back,” he said. “These players have quality and with the right additions in the summer, they have the ingredients to compete next year.”

In the first leg, Arsenal paid the price for not making more of their one-man advantage as Atletico had a player sent off after just 10 minutes but still rescued a 1-1 draw.

Diego Costa then scored the winner in the return leg after shrugging off Hector Bellerin and finishing off a quick counter just before halftime for his fourth goal in seven career games against Arsenal.

“We missed something in the final third because we had plenty of opportunities,” Wenger said. “If you look at the number of chances we created over the two games, the least you can say is that we can be very frustrated.

“In the first game, the tie should be over and in the second game, in the first half, we had plenty of opportunities but we always missed something in the final ball.”